SEMA IN THE MEDIA

The SEMA Businesswomen’s Network (SBN) embarked on an all-female Ford Bronco build this year to highlight successful women in the automotive industry while also attracting and supporting more females to pursue careers in the field.

The project came 10 years after the SBN led an award-winning all-female Ford Mustang build to raise awareness of women working in the automotive industry. “We know that automobiles are exciting and that there are countless job opportunities for women in the industry,” said Sara Morosan, SBN Chair Elect. “The 2022 SBN All-Female Vehicle Build will again shine the light on this important initiative and help women see what’s possible.” This year’s build took place at both SEMA Garages in Diamond Bar, Calif., and in Detroit before the completed vehicle traveled to Las Vegas to be displayed at the 2022 SEMA Show. These are some of the publications that have followed the project. 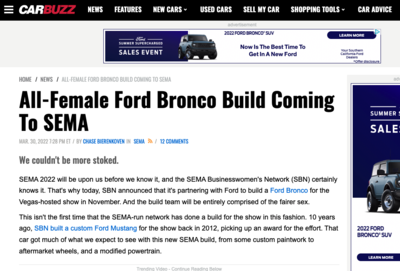 “We couldn’t be more stoked,” proclaimed Chase Bierenkoven when announcing the special project to CarBuzz readers. The editor was also eager to see if the build team would take either the overlanding route or if they would aim for “all-out performance in an attempt to out-Raptor the new Bronco Raptor.” 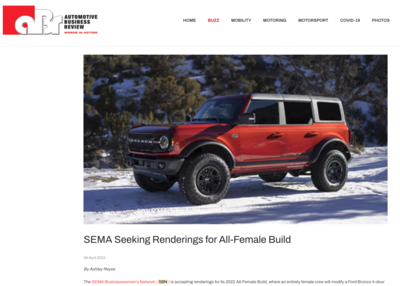 News of the SBN all-female build reached automotive aftermarket professionals in South Africa thanks to the editors of Automotive Business Review magazine. Readers were also informed that in an effort to give female designers an opportunity to showcase their work, the build team was accepting renderings from female professionals and students. 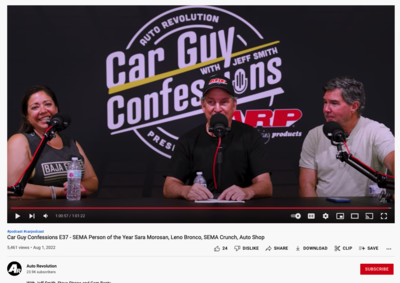 SBN Chair Elect Sara Morosan joined the “Car Guy Confessions” podcast crew to discuss many topics, including the SBN build. “We’re using this build as a tool to highlight all the job opportunities that are out there,” she said. “We’re working with a lot of women-owned companies.”

“The vehicle will depart for the SEMA Garage in Detroit on August 8, where final accessories will be installed, including enhanced electrical, lighting, exhaust, intake and wrap.”—Aftermarket Intel, via Facebook

“If you’re covering the #SEMA2022 show, don’t miss your chance to interview and see the All-Female Vehicle Build, in progress!”—PC Bennett, via Twitter

“Excited to see these women kick butt. Even more excited to photograph this baby on display at SEMA in November!”—Annette Bauer Creative, via Facebook

“The tricked-out Ford Bronco is set to debut just before the SEMA Show by the SEMA Businesswomen’s Network.”—Motor Age Magazine, via Facebook