The Spirit of the 1956 Championship Drags 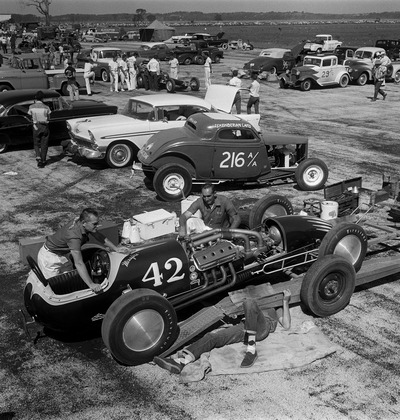 Over Labor Day weekend in 1956, the NHRA held its second-ever National Championship Drags, drawing 352 entrants “representing most of the 48 states and some prime winners who came from British Columbia and Hawaii” to a year-old dragstrip in Kansas City, Missouri. “Cars of every type and description gathered in the huge, expanded pit area at KC; each crew intent on taking home top honors in its class,” reported Hot Rod in its November 1956 issue.

Prominent in the foreground of this outtake from the magazine’s coverage is Missfire II, the blown Hemi dragster entered by Kenny Lindley and driven by Bob Alsenz. Throughout the course of the meet, Alsenz made consistent 150-mph-plus passes and earned a spot in the Dragster class eliminations. He faced Ed Cortopassi’s Glass Slipper in the first round and “flew past him like he was stalled,” Cortopassi reported, setting the top speed of the meet at 159.01 mph. In the class final, Alsenz faced Mel Heath, “a dark horse entrant from Oklahoma” who had just beaten the NHRA’s 1955 champion, Cal Rice, to make the last round.

As Hot Rod described their race, “the two projectile-like machines screamed side by side down the 1,320-ft. asphalt straightaway, crossing the finish line in what seemed to be a photo finish, at least as far as the two drivers were concerned.

“Way down at the far end of the course they pulled up, looking at one another. ‘Who won?’ asked Bob. ‘I don’t know,’ replied Mel. So they just sat there in their cars, silently awaiting announcer Bud Evans’ declaration of the winner.

“Soon it came. “The class winner...Melvin Heath of Oklahoma!’ No sooner had the sound died than Bob Alsenz was out of his cockpit and over at Mel’s side. ‘Let me be the first to shake your hand!’ Bob said. And there you have it, the spirit of the 1956 National Championship Drags.”

Heath went on to win KC’s Top Eliminator title, while Lindley and Alsenz, for their top speed mark, went home with a brand-new Chrysler V8.