Robert Matranga and his ’55 Chevy named “Brute Force” took the top prize in the eighth annual SEMA Battle of the Builders competition, edging out more than 240 vehicles that were entered into the internationally recognized contest. SEMA Battle of the Builders is widely known as one of the elite platforms for builders to showcase their work and compete for the coveted top honor during the SEMA Show in Las Vegas. 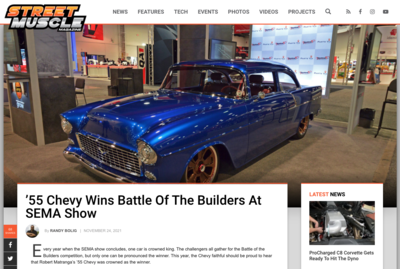 Editor Randy Bolig gave readers a detailed description and view of Matranga’s ’55 Chevy. He mentioned how “Brute Force” was scratch-built or heavily modified with many subtle details and just as many not-so-subtle details” and described the modifications made to the interior, engine, front of the car, and the overall exterior.

The Top 12 Battle of the Builders finalists were announced during the second day of the 2021 SEMA Show. The “On All Cylinders” staff provided descriptions and photos of each build that advanced to the next phase of the completion and informed readers that to be named a finalist meant that “you’re among the best custom vehicle builders on the planet.”

Andrew Ross worked the Battle of the Builders beat for the Canadian outlet and kept readers informed as two builders from Canada advanced in the competition. Chelsie Lesnoski (’93 Mazda RX-7) and Cole Marten (’91 Nissan Skyline) entered the Young Guns category in 2021, and both were among the Top 12 finalists.

Hoonigan’s Brian Scotto and Ron Zaras talk humble beginnings to their biggest showing ever at the 2021 SEMA Show. They include their favorites and what’s next on their to-do list.

At the 2021 SEMA Show on November 3, the Battle of the Builders competition announced the Top 12. For the first time in the history of the competition, two female builders advanced to the finals.

As the 2021 SEMA Show kicked off, attendees got a first-look at a special collaboration between Ford Motor Co., SEMA Garage and many SEMA members for Keith Urban.

Alex Taylor is the owner of Alex Taylor Racing and a builder, racer and content creator within the high-performance automotive industry. Taylor grew up in the automotive world and, at age 16, began racing the car that she and her parents built, becoming the youngest competitor in Hot Rod’s Drag Week. After Taylor graduated from college in 2020 with a BA in marketing, she dived into the industry full-time and is working to find her niche, especially by creating video content on her YouTube channel, “Riding with Alex Taylor.” Taylor and her dad recently built a new full tube-chassis ’55 Chevy that she will use to take her racing career up a notch, and she will be upgrading her NHRA license later this year.

Gabby Downing is an automotive and action-sports enthusiast, a DIY content creator and a mechanic. She shares her automotive and mountain-bike adventures through social media, documenting the struggles and successes of a self-taught mechanic turned drifter. With over half a million followers on Instagram, YouTube, TikTok and Facebook, Downing has attained millions of views monthly as she shares her passion with her audience. In addition to her social-media presence, she is known through several “MotorTrend” series, including “Bitchin’ Bootcamp” and “The Hooptie World Championship.”

Olivia Scaffidi is a 23-year-old hot rodder who is known for her junkyard engine builds and freelance contributions to Hot Rod. She is the proud owner of a ’71 Pontiac Firebird and ’71 Chevy El Camino, which she features on her social-media channels for meet-ups, maintenance and upgrades and for showcasing the hot-rod lifestyle. Her social platforms are steadily increasing as she features more junkyard engine content, which has so far nearly doubled her subscriber count and views.

“The SEMA Show wrapped up with the crowning of a new Battle of the Builders King—Robert Matranga and his ’55 Chevy ‘Brute Force’ won the top prize. This ride is a sight to behold indeed.”—Kruzin USA, via Facebook

Battle of the Builders Top 40 has been revealed for #SEMA2021. These 12 finalists, chosen by industry judges, represent the best of the best in the industry.”—Racing Equipment News, via Twitter 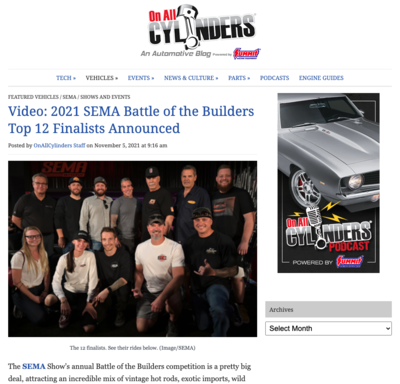