One of the biggest recent trends in the automotive industry was prevalent at the 2021 SEMA Show: the rise of custom electric vehicles (EVs). More builders than ever before have embraced going electric to create completely custom vehicles that incorporate electric drivetrains. Never before has the industry seen so many battery packs and motors replacing gas engines in old-school rides, hot rods, slammed trucks, and sports cars.

“We saw electric vehicles and electrified vehicles in every hall at the SEMA Show,” said Tom Gattuso, SEMA vice president of events. “Our industry is on the cutting edge of technology.”

The following are some of the publications that reported on the SEMA Show exhibitors and builders who demonstrated that the EV market is a growing segment for the aftermarket. 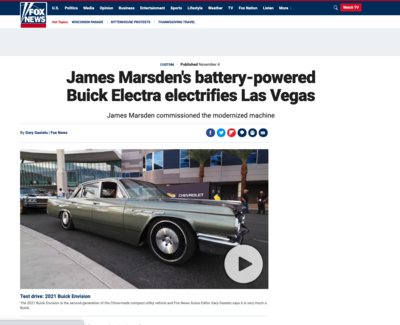 Ant Anstead, host of “Celebrity IOU: Joyride,” unveiled a custom at the 2021 SEMA Show. It had been converted into an electric car in collaboration with actor James Marsden. The classic Buick now runs on plug-in hybrid power that can cover 61 mi. on battery power and uses a turbocharged three-cylinder BMW engine that works as a generator for longer trips.

Motor Trend magazine’s editors compiled a photo gallery of the various EV conversions they came across at the 2021 SEMA Show. Among the vehicles they highlighted were a Porsche 911 RSR that makes 450 hp with a 47-kWh OX Drive divided into two battery packs, and a Ford Bronco that can produce 268 hp on an 85-kWh battery pack.

Editor Jonathan M. Gitlin’s interest was piqued by the F-100 “Eluminator” that was unveiled by Ford at the SEMA Show. The truck started life as a ’78 F-100 pickup but is now fully electric and powered by a pair of electric motors. He was also intrigued by an electric Cobra, a converted ’72 Plymouth Satellite and an electrified Honda S2000.

“GMC is previewing its two all-electric Hummer vehicles and a new group of accessories that will be available alongside them.”—GM-Trucks.com, via Facebook

“Ford unveiled a cool F-100 EV conversion concept at SEMA, but it takes training to learn how to retrofit your car to electric power without burning down the house.”—Autoweek, via Twitter

“Legacy EV CEO Rob Ward talks about the launch of EVs technician education program, proof of concept builds like the Gateway Bronco electric Bronco, and the future of EVs at SEMA 2021.”—RacingJunk, via YouTube 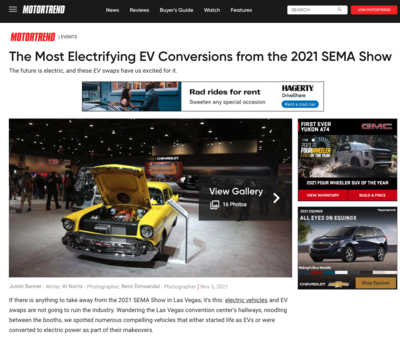