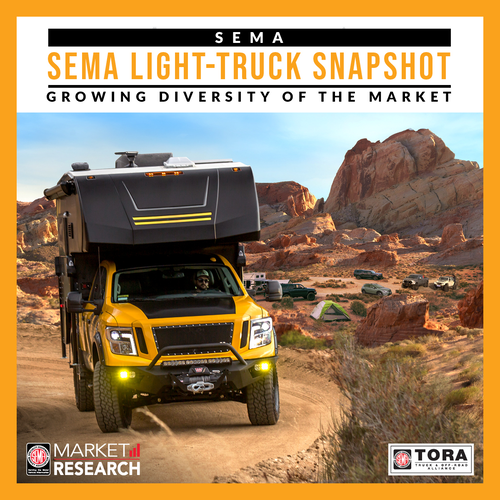 There are more than 281 million passenger vehicles on American roads today, and more than 166 million hail from the light-truck category. If that weren’t reason enough to take note of the truck segment, new SEMA research sees a decided shift in the marketplace, with light-truck offerings set to take an even bigger share of the market. So what does this changing vehicle landscape look like? What’s hot and trending in the truck segment? And most importantly, how can the aftermarket capitalize on those trends? The answers can be found in the latest “SEMA Light-Truck Snapshot” report from SEMA Market Research.

Available for free download at www.sema.org/market-research, the 95-page report starts with an overall picture of the light-truck vehicle landscape, including vehicles-in-operation (VIO) numbers. New-vehicle sales trends are also closely analyzed, and there are breakdowns of market share for small, midsize and fullsize models. The report also compares market sizing for the category’s pickup, crossover utility vehicle (CUV), sport-utility vehicle (SUV) and van segments.

In addition, the snapshot report highlights areas of opportunity for aftermarket businesses, not only by segment but by the most popular truck models and aftermarket applications. There are also sections examining off-roading, overlanding, outdoor recreation and powertrain trends that strongly influence specialty-equipment sales within the light-truck category. Consumer research into shopping and purchasing habits and stats about how truck owners actually use their vehicles round out the report.

“When we look at the specialty-equipment market, the light-truck sector dominates our market like it dominates OEM sales and vehicles on the road,” explained Gavin Knapp, SEMA Director of Market Research. “Pickups in particular comprise the biggest segment for sales of specialty-equipment, parts and accessories. SUVs are another strong segment, and we’re now also seeing the CUV market starting to emerge.”

“One of the things we really want to do with this truck market snapshot is give people an understanding of the diversity of the light-truck market,” continued Knapp. “When they hear light truck, they often default to the image of a pickup. But from a vehicle segment standpoint, light truck means a lot more. It also means SUVs, CUVs and even vans. So when you hear that light trucks outsell cars three to one, it’s not necessarily that people are buying a whole lot more pickups. Often what it means is people are shifting into platforms like CUVs, which is where a lot of the sales are going.”

In fact, with consumers abandoning traditional cars for a growing number of CUV platforms, light-truck sales are expected to climb to more than 80% of new-vehicle sales. But even as CUV sales surge, the stalwart pickup promises to remain big as ever—albeit not literally.

The Return of Smaller Pickups

“As we took a deeper dive into truck segments, another thing we wanted this report to do was look at what’s happening with the many platforms within the broader-segment groups. For example, this report delves into what’s going on with small-

“Back in the ’80s you had a lot of small pickups on the road mixed with fullsize,” he explained. “Then in the ’90s and ’00s there was a shift not only toward fullsize taking more of the market, but even the smaller pickups growing in size. In 1990, 48% of trucks sold were small pickups, and that percentage shrank even through the ’00s recession. By 2014 or so, only 11% of the pickups being sold were small pickups. But we’ve seen that start to swing back a little over the past couple of years with trucks like the Chevrolet Colorado and the Ford Ranger—these sort of midsize or small pickups that are becoming more prevalent. Even with Ford now announcing the Maverick, there’s recognition that there’s a returning market for smaller pickups.”

According to Kennedy, there’s more at play here than fuel efficiency or shrinking engine displacements. “Frankly, fullsize trucks have gotten expensive and there’s some call among consumers for more budget-friendly options,” he observed.

However, even with OEMs now introducing more modestly sized platforms, fullsize models remain highly popular with truck enthusiasts. Of the 57.6 million pickups registered in the United States, the Ford F-Series and GM Fullsize Pickup top the list at 16.1 million and 18.1 million registrations, respectively. Also making the Top 10 are the Toyota Tacoma and Tundra, Dodge Ram and Dakota, Nissan Frontier and Titan, and GM Midsize Pickup. All in all, pickups comprise 20% of the U.S. vehicle fleet—a healthy market by any measure.

Although they now take a diminished share of overall vehicle sales, SUVs also continue to warm truck-enthusiast hearts. In fact, they make up 13% of all vehicles on the road, with SUV ownership especially high in the South.

“SUVs had a big heyday from the ’90s into the ’00s, but they’ve struggled since, and haven’t quite recovered to the sales levels we were seeing prior to the 2008 recession,” said Kennedy. “Still, within the SUV space there are some really iconic models. We go straight to the Jeep Wrangler—while it’s sort of its own phenomenon, it’s one SUV that definitely gets a lot of attention and work. So do SUVs like the Chevrolet Blazer and Tahoe. In fact, SEMA Market Research gets regular inquiries for VIO [vehicles-in-operation] information from folks who are looking to create and sell product for some of these midsize and larger SUVs.”

Because they are such highly modified vehicles, Jeeps and their owners receive special attention in the report. The research shows deep levels of aftermarket engagement among Jeep enthusiasts. Half of them wrench on their vehicle at least monthly or more, and over 70% of all purchased parts are owner-installed. Moreover, Jeep owners are voracious consumers of all sorts of exterior and interior enhancements, wheels and tires, suspension upgrades, braking and steering items, lighting and lifestyle accessories.

“When we’re talking about SUVs, we’re talking a really strong connection between the category and off-roading—number one being the Jeep Wrangler, of course,” said Knapp. “But there’s also a history of other models like the Tahoe and the 4Runner being really capable off-roaders. And then looking forward, we see the next generation of off-road-focused vehicles in the new Ford Bronco, which is very much focused on the off-road, outdoor lifestyle.”

The report notes that off-roading remains as popular as ever, and products that make SUVs and pickups dirt-capable—or at least looking like a true off-roader—remain prime areas of opportunity for the aftermarket. Statistically, about a quarter of accessorized SUVs and nearly 30% of accessorized pickups are used off the payment. Plus there’s synergy between the two vehicle types. Given the prominence of Jeep SUVs in particular, it’s likely Jeep’s Gladiator will become another big off-road player packed with modification possibilities.

Of course, closely related to off-roading, overlanding continues to grow as a phenomenon, and likely got a boost during the pandemic as locked-down consumers looked for ways to avoid going stir-crazy. Based on Lodestone Events data, the report notes that casual and advanced overlanders alike tend to outfit their vehicles with off-road tires, suspension upgrades, auxiliary lighting, air-down tools, roof racks and more. Nor is overlanding likely to be a quickly passing fad.

“‘Living off-road’ is so much a part of our culture, whether it’s true off-roading, camping or going off-road to work on the farm,” said Kennedy. “There’s a connection between trucks and traveling to wherever and doing things. We see that when we look at how people use their vehicles. For all that to disappear, the culture around what it means to own a truck would have to change drastically.”

Perhaps the most challenging riddle for the industry will be how the emerging CUV category might fit into the “truck lifestyle.” Although CUVs closely mimic their SUV cousins, crossovers are generally built on car, not truck, platforms. Introduced in the mid-’90s, these newcomers have appealed to consumers through a mixture of good fuel economy and a lot of cargo capacity. What’s more, automakers are increasingly positioning them as outdoor lifestyle vehicles, sometimes with off-road packages. A few CUVs tricked out for camping even appeared in the 2019 SEMA Show’s Overland Experience exhibit.

“The question for our industry will be whether that’s the way consumers will look at these vehicles en masse,” said Knapp. “In other words, are consumers who move from traditional cars into CUVs going to look at them the way that a traditional SUV buyer does? Will they see them as another form of truck and therefore use and accessorize them for camping, towing and hauling, and putting racks on them? Or are consumers largely going to see them as just different-shaped cars?”

“I think one of the interesting challenges is the CUV space represents a lot of sales, but also a lot of platforms,” added Kennedy. “We’ve seen estimates that there will be 170 different CUV models by 2028. Compare that to pickups which are more like 20 models. If you want to cover pickups, you don’t have to plan for too many different models. But crossovers are such a diverse space. Still, that also means there may be plenty of opportunities to find particular vehicles that have enthusiast appeal.”

One noteworthy example has been the Subaru Outback, which consumers have widely embraced for utility and off-road adventuring—so much so that Subaru is introducing an enhanced Outback Wilderness package this year.

For the broader CUV market, however, there may be a period of shakedown while consumers and the aftermarket decide what to make of the vehicles.

“CUVs don’t really say, ‘wow, performance, go fast.’ So it’s somewhat doubtful that the category will have a lot of uptake in the go-fast area of performance as much as the area of utility,” observed Knapp. “However, one aftermarket category that’s small at the moment but could potentially catch on is suspension, wheels and tires, especially as some crossovers take on more of that truck or SUV look and feel.”

Kennedy agreed. “If we see a sustained association with—if not true off-roading or overlanding—at least driving to where the trail begins, then that market for off-road tires might be the gateway drug that gets people into doing more extensive work on their CUVs.”

To download your free copy of the 2021 “SEMA Light-Truck Snapshot” visit www.sema.org/market-research. While there, be sure to check out the many other SEMA Market Research reports that can help your business succeed and prosper. 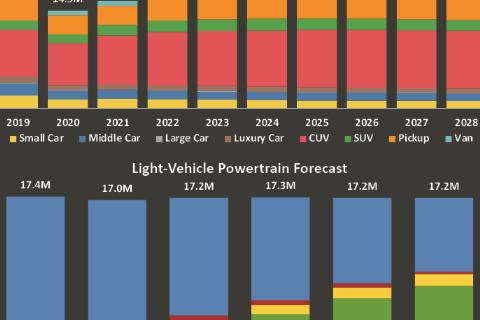 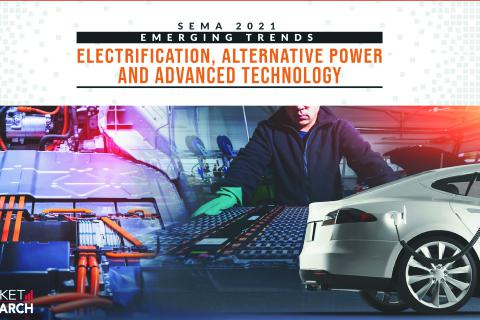 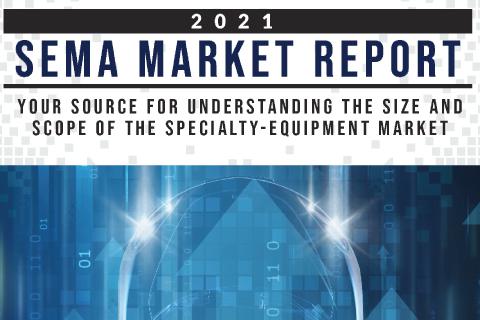