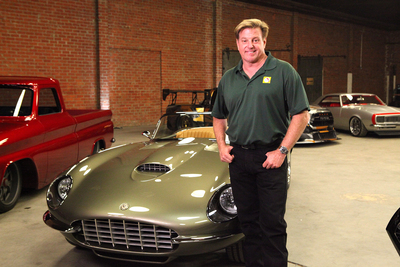 Very few people in the automotive industry require little to no introduction, but when you’re one of the most celebrated designers in industry history, you write your own intros wherever you appear. In a career spanning nearly 30 years, Chip Foose has dazzled his fellow builders, car enthusiasts and non-enthusiasts alike with his unique automotive artistry, both as the owner of Chip Foose Design in Huntington Beach, California, and as the star of the long-running TLC TV series “Overhaulin.’”

The 21st century’s most decorated car designer, he has won four Ridler awards, eight Most Beautiful Roadster honors, seven Goodguys Street Rod of the Year awards, and his ‘74 Jaguar E-Type roadster (pictured) won the Sport/Compact class at SEMA’s Battle of the Builders 2020. Recently he was named Official Artist for the 2022 SEMA Show, and his creativity will be on display all during Show Week throughout the Las Vegas Convention Center’s five spacious exhibit halls.

We had a chance recently to spend a few minutes with Foose, who was serving as a judge for the semifinal round of this year’s SEMA Launch Pad, which was held at the SEMA Garage in Diamond Bar, California. What follows is edited for clarity
and length.

SEMA News: The Las Vegas Convention Center is a pretty big canvas to work with. What challenges has this presented, and how have you approached the work?

Chip Foose: I’m thankful I don’t have to paint that actual canvas! [Laughs.] Instead, there’ll be oversized prints of my renderings at the Show. The biggest challenge for me has been finding the time to work on the table since I’m trying to run a business—and I’ve got cars that I’m trying to get finished in time for the SEMA Show.

SN: You’ve won so many industry honors and awards. What keeps you motivated, and what keeps you passionate about the industry these days?

CF: It’s not the cars, it’s the people. I love making people smile and showing them something they’ve never seen before. I don’t want people to look at a car and know exactly what we’ve done the minute they see it. If we’re modifying a car, I like to say we’re ‘tailoring’ it. I’ll look at the car and ask, ‘What was the original designer trying to do?’ and use that to build a show car out of that production car.

SN: Describe your very first SEMA Show. What do you remember the most about it?

CF: Early in my career as a car builder, I would look at car magazines, and that’s where I would find the products to build the cars. When I went to the SEMA Show for the first time in 1985, I saw everybody! You know, some companies don’t have the money to advertise in a magazine—but at SEMA, you can find anything. It’s a huge help. It was a life-changing experience for me.

SN: What’s your take on the current state of OE car design? Are there any marques or models that you really like?

CF: It’s funny you ask because I don’t really follow current manufacturers’ design work as much as I used to. I really used to be eager to find out what was happening, but I have not been so inspired for many years.

SN: What’s the most difficult project you ever took on, and how did you manage to complete it?

CF: I never looked at any projects as difficult—I just look at them as opportunities, and I’ve been lucky and blessed to have had so many great opportunities.

SN: What has surprised you the most about the industry during your time in it?

CF: Maybe it’s not a ‘surprise,’ but I’ve been amazed at how helpful people in the industry have been. I’ve had questions for people who I thought would never give me the time of day, but I’ve never had a door slammed in my face, and I just hope to be able to do the same for anyone else who has a question or needs help.

SN: Who do you follow on social media? Are there any fellow builders and designers out there whose work you admire?

CF: I have people in my office who handle our social accounts, but I personally don’t spend time on social media. As far as other builders in the industry are concerned, I consider every one of them to be a potential best friend. They have the same passion
I have!

SN: What’s your daily driver these days, and what do you like best about it?

CF: My daily driver nowadays is a ’20 Ford F-150 Limited, and what I like best about it is keyless entry.

SN: If you went back to school, what would you study?

CF: I would want to learn about computer-aided design (CAD). I don’t use a computer at all, and I don’t even use email. I’m completely old school, but when I see some of the drawings that are done on a computer, they’re so beautiful, they blow me away. So I’d like to learn more about CAD sometime in my life.

SN: When you’re not working, where can we find you, and what will you be doing?

CF: If I’m not working, I’m with my girlfriend or my children—and enjoying life!

For more information about the 2022 SEMA Show, being held November 1–4, in Las Vegas, visit www.SEMAShow.com.