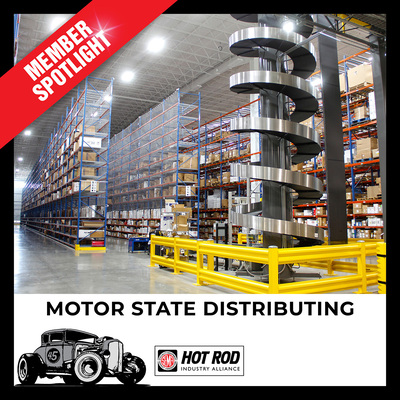 Get to know the story of their business in SEMA’s interview with company director of marketing Scott Wahlstrom below:

SEMA: How did you start your company?

Scott Wahlstrom: George Lane, founder of Lane Automotive and Motor State Distributing, was passionate about cars from a very young age, and got into building hot rods and drag cars while still in high school. Living in southwest Michigan, local options for performance parts were extremely limited, so he would often order parts from companies on the West Coast. He soon found suppliers in Chicago and Detroit and would make runs to get parts for his projects, and as word got around, he began acquiring parts for his friends in the hot-rod and racing scenes.

These parts runs led to the founding of Lane Automotive, which officially began in 1964 when Lane opened a speed shop in his garage as a part-time venture, selling racing and hot rod parts to fellow automotive enthusiasts in the southwest Michigan area. This small shop quickly grew to become a full-time business with its own dedicated store front. His success with his speed shop led to discussions with the various performance parts manufacturers, who offered better pricing if he would serve as a wholesale distributor for them in the Upper Midwest area, and in 1970 he launched his wholesale warehouse distribution division, which he called Motor State Distributing. In the years since, specialty parts brands such as Allstar Performance, QuickCar, Ti22 Performance, MPD Racing, and ShurTrax were added under the company umbrella.

Today, Motor State Distributing serves thousands of wholesale customers across the United States and Canada and in dozens of countries around the world. As an industry-leading wholesale distributor of performance parts, Motor State supplies businesses ranging from one-man engine builders and fabricators to large retailers and custom shops, as well as supporting a growing network of eCommerce retailers through fulfillment sales. At the same time, the local speed shop that Lane started in his garage remains a fixture of the local hot rodding and racing community, operating out of a modern 10,000-sq.-ft. showroom in our corporate headquarters.

SEMA: What was your breakthrough moment?

SW: The team at Motor State Distributing strives to deliver the best possible customer experience. We offer an incredible selection of products, with more than 100,000 different part numbers in stock, representing 675-plus different brands, all supported by a knowledgeable sales team with real-world industry experience. Many members of the Motor State team are racers, hot rodders or fabricators themselves, and can provide first-hand experience for many of the products we sell.

SEMA: Tell us about your business now and the projects you are working on.

SW: With the ever-changing performance aftermarket and the unprecedented growth in many areas of the industry, combined with an ongoing shortage of workers, we are focused on new technologies and approaches to further improve efficiencies. This involves adapting our processes and equipment to meet shifting business needs, as well as continuing to expand into new marketplaces as they evolve. This year will see a number of capital projects aimed at further improving our efficiency and accuracy, while preparing us for continued growth in the years to come.

SEMA: Tell us something about the business you are proud of.

SW: When George Lane launched Motor State Distributing’s parent company, Lane Automotive, his shop consisted of a roughly 200-sq.-ft. area on one side of his garage. Today, the company operates out of its 416,000-sq.-ft. distribution center and headquarters, just a couple miles down the road from its first dedicated store front. In the years between its founding and now, the company has outgrown several buildings, including the company’s first dedicated storefront, a retail store with an attached warehouse that supported the first Motor State Distributing trucks, to the 50,000-sq.-ft. warehouse that now serves as the packaging center for several of Lane Automotive’s owned brands. Even the new headquarters building, opened in 1999, has grown from 153,000 sq. ft. to 416,000, thanks to a major expansion in 2017. New technologies and processes will help us make even more efficient use of this space in the future.

SEMA: What advice do you have for young professionals contemplating a career in the automotive aftermarket?

SW: In virtually any industry, passion and following your dreams is critical to success. In the automotive aftermarket, this is especially true. There are constantly new challenges and unexpected hiccups, yet the ability to persevere and stay focused while working toward your vision can overcome them. In addition, the hot-rod industry is increasingly a balance between old-school craftsmanship and modern technology, and the ability to embrace both will be an important trait as the industry continues to evolve. Handcrafted parts often come together with CAD-designed, CNC-machined, or even 3-D-printed components, and it’s not unusual to drop a modern fuel-injected engine into a classic chassis equipped with the latest suspension technology.

Fill out an HRIA-member spotlight form to highlight how your company is contributing to the hot-rod industry. Selected candidates are eligible to be featured on HRIA’s social media, SEMA News and future HRIA-member updates.