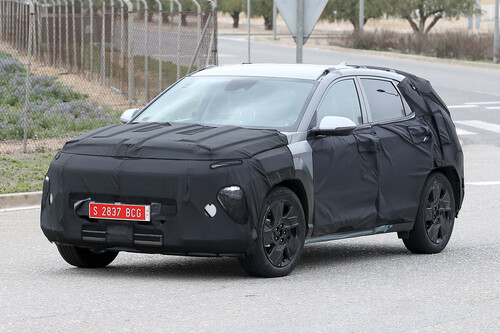 Another prototype for the next-generation Hyundai Kona has been spied testing in Spain ahead of a possible reveal in 2023. Although this spied Kona prototype appears to be an internal-combustion-powered model due to the exhaust tip visible in the rear shots, Hyundai is expected to continue to offer a Kona Electric.

Looking at the front of the prototype, the split headlight design with the main headlight unit is mounted lower on the bumper and the daytime running lights mounted higher.

The first-generation Kona, which debuted in 2017, was the first Hyundai vehicle to feature the split headlight design. This design element has since been rolled out to other Hyundai offerings such as the Staria, Palisade, Santa Fe, Tucson and Venue. Compared to the current Kona, this prototype has a headlight unit that’s more vertical like the ones on the Palisade.

Around the side it’s hard to distinguish what changes have been made, but the wheelbase appears to be slightly elongated while the overhangs don’t appear longer than those of the current car. The rear end of the spied Kona prototype is almost entirely camouflaged, so what it’ll look like remains a mystery.

It’s hard to tell if the taillights are fake prototype units or production-ready ones, but it appears the next-generation Kona could continue to offer split lighting at the rear, too. In the current-model Kona, there’s a slim unit up higher on the tailgate that houses the brake lights and the running lights, as well as a lower unit that houses the reverse lights, indicators and the reflectors.

In terms of engine offerings, it’s unclear if there will be any changes to the existing lineup. It was previously reported that Hyundai has closed its engine development division, with a small group of engineers continuing to update existing internal-combustion engine designs. 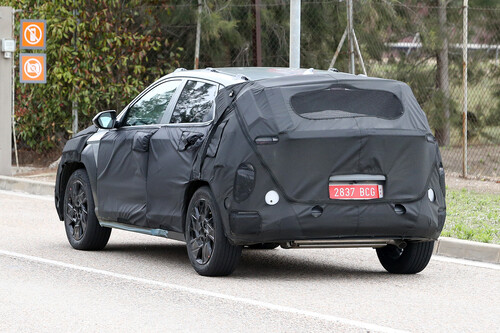