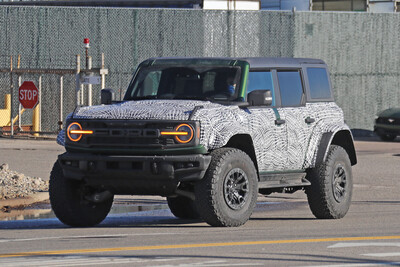 This is a virtually undisguised Ford Bronco Raptor in Dearborn, Michigan.

The Bronco Raptor features the infamous FORD grille, which has been seen on Raptors since inception, and also gains some aggressive front fender vents—something not previously seen on a Bronco.

All the expected workings of a Raptor are present and accounted for, including a significantly higher ground clearance, wider wheel arches, and a wider, more aggressive stance and of course the FORD grille.

The prototype rides on a set of BF Goodrich AT All Terrain T/A tires, though we can’t quite make out the size (it appears to be a 17-in. rim). Power is expected to come from the 3.0L twin turbo V6 mated to a seven-speed automatic.

The Bronco Raptor will launch for the ’23 model year, where it is expected to join the F-150 Raptor and Ranger Raptor. Expect an official debut in the first quarter of 2022. 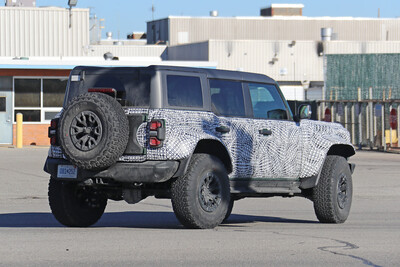