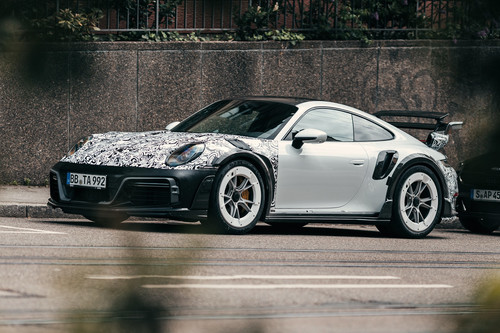 The GTstreet R performance model of the Porsche tuning company TECHART was spotted parked in downtown Stuttgart. The car will most likely be presented in the upcoming weeks.

The front of the GTstreet R has been aerodynamically improved over the “standard” 911 Turbo S. Carbon-fiber flaps ensure improved air flow on the new front apron. The carbon-fiber front hood with large GT3-like air inlets makes us expect significantly reduced lift at the front. Also, clearly visible above the widened fenders on the front are pronounced air outlets.

The rear features an aerodynamic carbon-fiber spoiler. Insiders report that an additional rear wing profile can be extended variably to maximize downforce on the racetrack.

Besides the spoiler, TECHART has given the rear a more aggressive apron compared to the Zuffenhausen models featuring a large carbon diffuser with two massive, center-mounted tailpipes. This sports exhaust system is said to deliver a deep sound.

Further to the edges of the car, the Formula VI Race wheels are equipped with aerodynamic discs. With TECHART having its own carbon manufacturing, these aero discs will likely be made of that material as well.

Performance of the engine under the wings can only be guessed. With the performance increase for the 911 Turbo S being 60 hp and 74 lb.-ft. to a total of 710 hp and 665 lb.-ft., a total power output of around 800 hp is expected for the second power stage. This means that the TECHART GTstreet R will be significantly faster than its counterpart from the Zuffenhausen factory.

While the interior of this particular prototype wasn’t modified, TECHART is known for its handcrafted interior refinement programs. For the predecessor, a clubsport package with roll bars, sports seats and individualized steering wheels were available. Expect the same to come for the new model, too, without having to do without standard comfort features of the base model. 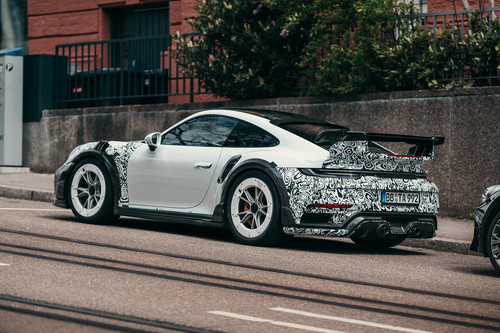