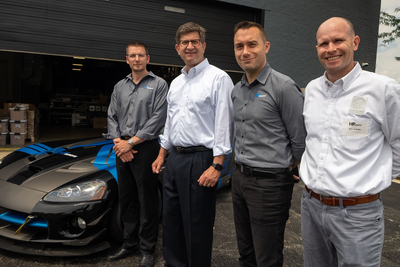 What’s the secret to impacting policy in Washington? The answer is easy—get to know your lawmakers by inviting them to tour your business and meet your employees. Hosting your elected officials gives them a chance to learn about your business and see firsthand the products you produce and sell. HP Tuners in Buffalo Grove, Illinois, understands this principle, recently hosting U.S. Representative Brad Schneider (D-IL) for a tour, Q&A session with its employees, and a private meeting with HP Tuners’ executive management team.

Keith Prociuk, the CEO and co-owner of HP Tuners, founded the business in 2003 along with Co-Owner Chris Piastri, whose son Oscar will be driving for McLaren’s F1 team in 2023. For Keith, racing was and continues to be a passion, and co-founding HP Tuners proved to be a great way to help offset the costs associated with competing on the track.

HP Tuners designs and manufactures software and hardware tools for vehicle diagnostics, scanning, logging, calibration and data-acquisition purposes. The company’s products are used both for racing and helping to bring motor vehicles into emissions compliance (or to maintain emissions compliance). HP Tuners has grown considerably over the last 20 years and is known for offering some of the most powerful and user-friendly flash-tuning solutions on the market today.

While the business interests of HP Tuners keep Keith Prociuk extremely busy, he still finds time for the important things in life, family and racing. Keith competes in the Trans Am TA2 series, driving the No. 9 HP Tuners Chevrolet Camaro car for the Mike Cope Racing Enterprises team.

Given the federal government’s recent intervention into the automotive aftermarket and racing industry, HP Tuners has worked closely with SEMA on emissions compliance and has been a strong supporter of the Recognizing the Protection of Motorsports (RPM) Act. After participating in a virtual meeting with Rep. Schneider in 2021, Andrew Mernone, COO at HP Tuners, extended an invitation to the congressman to visit the company’s headquarters in Buffalo Grove, which Rep. Schneider gladly accepted.

After touring the Buffalo Grove facility, Rep. Schneider addressed the company’s employees and took questions. The final stop was a meeting with HP Tuners management team and key employees where they discussed federal policy issues that impact the company. It was clear that Rep. Schneider came to the meeting prepared, as he had a clear understanding of the need to provide motorsports parts businesses with certainty and an assurance that the U.S. Environmental Protection Agency will not fine them for simply producing and selling products used exclusively on the track. The congressman informed HP Tuners’ senior leadership that he would support the RPM Act and officially joined the bill as a co-sponsor just days after the meeting.

“We were happy to welcome Congressman Brad Schneider to come take a tour of HP Tuners and share some insights with our employees,” said Prociuk. “Thank you to the congressman for visiting and engaging in a thoughtful dialogue about some of the most important issues facing the industry, including the RPM Act, the right to repair and modify vehicles, tax policy, and data protection/cyber security. We appreciate Rep. Schneider voicing his support for the RPM Act, which is so critically important to our company and racers like myself.”

Rep. Schneider represents Illinois’s 10th Congressional District in the U.S. House of Representatives, which stretches from just north of Chicago up to the Wisconsin border. The congressman is currently serving in his fifth term in the House, where he is a member of the Ways and Means Committee, which is responsible for tax policy, and the Foreign Affairs Committee.

Rep. Schneider has a bachelor’s in industrial engineering and a master’s in business administration from Northwestern University. Prior to being elected to Congress, Rep. Schneider spent more than 20 years in business and management consulting, helping both large and family-owned businesses address the challenges of a changing economy and plan for the future. His private-sector experience provided him a first-hand look at the challenges small businesses face when trying to hire new workers and grow their company, as well as the effect thriving small businesses can have on a community’s overall well-being. Rep. Schneider and his wife Juli, have been residents of Deerfield, Illinois, for almost 30 years, where they raised their two sons, Adam and Daniel.

For more on the RPM Act and how to host your federal lawmakers, contact Eric Snyder at erics@sema.org.

Host Members of Congress at Your Business

Do you want Congress to pass bills that protect our automotive freedoms and enable the specialty automotive aftermarket to thrive? Do you wish that policymakers in Washington, D.C., understood our industry and the thousands of jobs that it creates in communities throughout the United States? If your answer to those questions is yes, now is the time to get involved with SEMA’s efforts to connect your business with members of Congress. 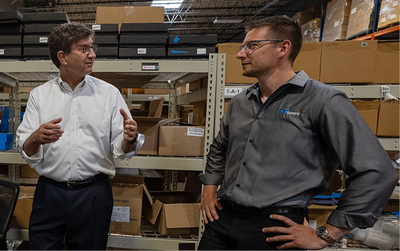 SEMA members have been hosting members of the U.S. House of Representatives and Senate at their businesses for more than 20 years. Congressional site visits are an integral way for SEMA and its members to develop meaningful relationships with lawmakers. Visiting your business will help them understand and appreciate our industry so that they can advocate for policies that defend and grow it. If you would like to get to know your members of Congress, we stand ready to help and to make it easy for you and your team!

The first step in developing a relationship with your members of Congress is to introduce yourself and invite them to your business. SEMA staff will draft up an invitation, send it to your lawmakers, and coordinate with their staff to schedule the visit. Once the lawmaker is confirmed to visit your business, we will work with you to plan the event and manage day-of logistics in coordination with you and your company. Our government relations team is ready to do the heavy lifting!

Lastly, SEMA encourages its member companies to learn more about its Political Action Committee—SEMA PAC. By law, SEMA may not use association funds to contribute to federal candidates. However, SEMA PAC allows the administrative and executive employees of SEMA-member companies to contribute their personal funds to help elect lawmakers who support our industry’s positions and initiatives. Government rules require SEMA PAC to get each member company’s permission before it can ask their employees for support. It’s an easy process known as becoming prior approved, and it only takes seconds. To learn more or to become prior approved go to www.SEMApac.com or contact Christian Robinson at christianr@sema.org.