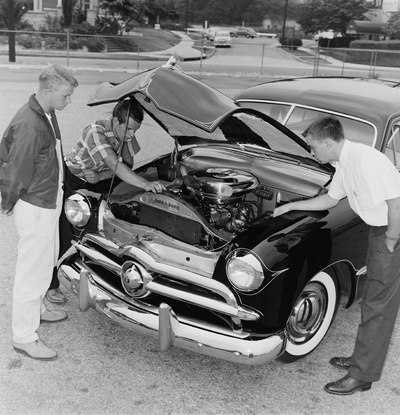 “Packed with husky new overheads, the typical street rods of today are high-tailed and handsome.” That’s how Hot Rod editors began a story in the November 1956 issue called “Now and Then,” contrasting rod-building trends of the past and present. This car, Dick Phillips’ ’49 Ford, was chosen to represent the “now” side of the coin.

The “new overheads” the editors referred to represented the latest trend in engine swaps. The venerable Flathead Ford had its day; hot rodders were dumping those engines for overhead-valve V8s from Oldsmobile, Cadillac, Chevrolet and the Chrysler Corporation. During these years, almost every issue of the magazine had a how-to story about an overhead-valve transplant. The new engines were going into all kinds of Fords and other cars as well, from Studebakers to Corvettes and even British sports cars like Jaguars and MGs.

In this case, Phillips (in the plaid shirt) transplanted a DeSoto Firedome Hemi into his coupe—and called it out with the “Ford-A-Dome” lettering on the radiator support. The bulky engine was, the editors admitted, a snug fit, and Phillips had to forego using a fan to make it work. The Hemi retained its stock bore and stroke, but Phillips hopped it up a bit by adapting a Cadillac air cleaner and a Rochester four-barrel carburetor to the DeSoto intake manifold. He also bumped the compression ratio by taking a 0.030-in. slice out of the cylinder heads. A Hayes clutch joined the engine to a ’54 Mercury transmission.

Other than the engine swap, Phillips’ Ford is a relatively mild custom. Much of the trim remains on the car, the grille and bumpers look unmolested, and the roof is at its stock height. It’s hard to tell from this angle, but the coupe had a bit of a rake front to back, achieved by the additional weight of the engine, the removal of a coil from each of the front springs, and big rear tires. The wide whites are dressed up with ’56 Plymouth hubcaps.

The caption for this photo described a liberal use of “chrome and bronze plating” in the Ford’s engine bay, “against blue enamel fender panels and firewall.” Note the tasteful pinstriping on the hood’s leading edge and around the grille and the Cadillac headlight buckets. Other photos shot on this day in August 1956 show the pinstriping continued over the front wheel arches and picked up again around the gas cap and onto the trunk lid. The interior was completely redone in black and white Naugahyde.