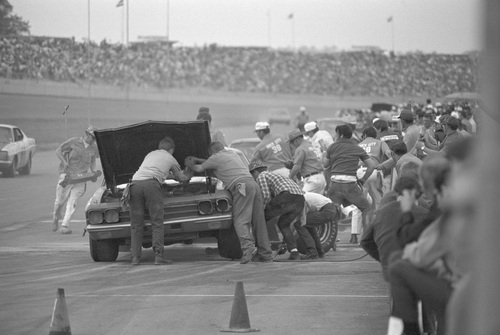 Hot Rod Feature Editor Steve Kelly traveled to Alabama in April 1970 to cover NASCAR’s inaugural Alabama 500 in Talladega. His spot along the pit wall gave him a good view of the furious activity that took place while the race was under caution.

“Six men were allowed over the wall, and the fastest cars had all four tires changed at once,” he wrote. “Mechanics got a workout!”

Pit crew safety equipment has come a long way since then.

This was the second race that took place at Talladega, and it went much smoother—literally—than the first, which was held the previous September. Rough track surface conditions on the new tri-oval—in combination with downforce generated by a new wave of car aerodynamics (particularly with the winged Dodge Charger Daytona)—were shredding race tires.

In the interest of their own safety, drivers wanted the race postponed until a solution was found; NASCAR owner Bill France said they’d be fine if they just slowed down. As a result of the stalemate, more than 30 drivers boycotted the race, and France was forced to fill the grid from the ranks of the Grand Touring support series.

Since that rocky start, most of the track had been resurfaced, Kelly reported, and the tires were improved.

“Goodyear spent time and money on six different testing sessions and finally came up with a ‘minimum tread pattern’ tire that made it possible for drivers to run their cars as fast as they could without fear of tire failure,” he wrote.

Bobby Isaac, driving a ’69 Charger Daytona, was the fastest qualifier for the weekend, running 199.658 mph.

“Chrysler products definitely had the edge,” Kelly noted, “but David Pearson [in a Ford Torino Talladega] was close at 198.928 mph.”

By the end of the race’s 188 laps, Isaac finished second and Pearson third. Pete Hamilton won the race in a ’70 Plymouth Superbird, leading the final 18 laps.

“Pete wasn’t the same dark horse at Talladega that he was when he won this year’s Daytona 500,” Kelly wrote. “The Petty Engineering crew responsible for his Plymouth never has been.”