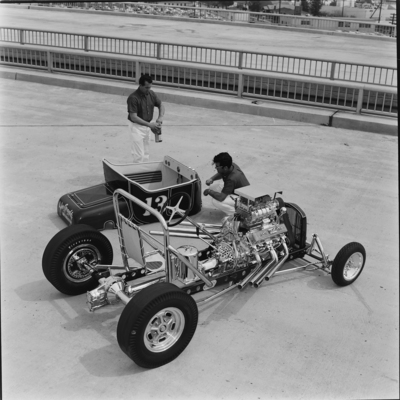 Hot Rod magazine’s October 1959 cover car, a 1923 Model T called Grasshopper, “was one car that shouldn’t ever have to wear a body,” said Eric Rickman, who shot the feature in March 1959. “It covers the best part!” This unpublished outtake shows off why Rickman felt that way—in addition to capturing builders John Geraghty and John Crawford as they prep the car for the camera.

The T was named for its mint green paint, but Rickman was far more interested in the liberally chromed chassis and the blown 461-inch Oldsmobile V-8 that he said could propel the car to “130-plus-mph runs.” Tom Beatty provided the 4-71 GMC supercharger, which could be fed either by fuel injection or the dual-quad carburetors seen in the photo. Visible behind the supercharger case is a “Joe Hunt converted Swiss Scintilla magneto.” The bellhousing ahead of the La Salle transmission was punched full of lightening holes, as were the “already light alloy channel framerails” and the backing plates for the rear brakes. “Rear brakes are all there is,” Rickman said, and they needed to be cooled to bring the car down from “draggin’ speeds.”

The front suspension consisted of a dropped Ford axle, transverse spring pack and Monroe shocks, their lower mount combined with the attachment point for the split-wishbone radius arms. In back, a chromed Halibrand quick-change center section “does the thinking for the late pre-war Ford rearend.” Geraghty and Crawford also tapped Halibrand for the magnesium wheels for the front runners and Inglewood slicks.

The seat, such as it is, is a strip of green and white leatherette strung “hammock-style” to the rollbar. The inside of the T’s body was upholstered in matching material, and the simple dashboard held just oil pressure, coolant temperature and fuel pressure gauges and a tachometer.

Rickman said Geraghty and Crawford took “just two months” to build the T, a remarkable achievement in that brief span of time. He said they spent “$3,000 in the process,” about the cost of a brand-new Corvette in 1959.