Behind the Scenes at the First SEMA Show 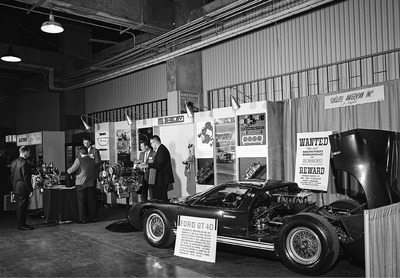 The Shelby American booth featured a prototype GT40, speed parts for the Cobra and GT 350 hanging on the wall, and a Paxton-supercharged 302 on an engine stand.

Fifty-five years ago, during a cold and blustery week in early January 1967, 120 members of the performance aftermarket manned 98 booths on the Stadium Club level of Dodger Stadium for what was billed as the First Annual High Performance and Custom Trade Show. More than 3,000 people attended the show and took part in numerous activities set up to complement the event, from an exhibitor’s banquet held at the famous Coconut Grove nightclub inside the Ambassador Hotel to guided tours of the area’s many performance parts manufacturers.

Today the SEMA Show is a fixture in the performance industry. In 1966, it was just an idea.

“It was Mr. Petersen who had the idea in the first place,” recalled GiGi Carleton, longtime executive assistant and personal manager to publishing magnate Robert E. Petersen (and now President of the Margie and Robert E. Petersen Foundation). In the fall of 1966, Petersen launched Hot Rod Industry News (HRIN), a trade magazine devoted to the business of automotive performance and a sibling title to his then-nearly-20-year-old Hot Rod magazine. He believed a trade show “was a ‘must’ activity for the new magazine,” as he said in HRIN’s January 1967 issue. In charge of the endeavor was Dick Wells, who was then working in Petersen Publishing’s Special Events department. He was aided by Carleton and Alex Xydias, Publisher of HRIN and, years before, the founder of the original SO-CAL Speed Shop. 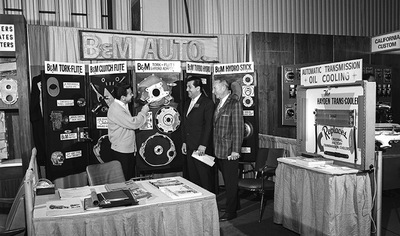 “I believe we had six months, or possibly less, to plan for that first show,” Carleton said.

Selling the show “fit me to a T,” said Xydias, who recently celebrated his 100th birthday. “When I was at the speed shop, I knew every manufacturer in town. I bought stuff from all of them, so it was easy for me to talk to them about a booth in the show.”

Dodger Stadium wasn’t so much chosen for the venue as it was inevitable. “It was the only venue available at the time in early January with a big parking lot,” Carleton said. “The Anaheim Convention Center was in the process of being built. We looked at the Hollywood Palladium and even the Great Western Arena near downtown L.A. The idea was to have it in Los Angeles near the two airports, LAX and Lockheed,” as the Burbank Airport was called then.

As for the show itself, “we just kind of patched it together,” Xydias recalled. “Booths were pretty much a card table and two chairs, with an eight-foot drape behind. We gave them a sign with their name on it, and that was pretty much it for everybody. Nobody had much experience with it.” 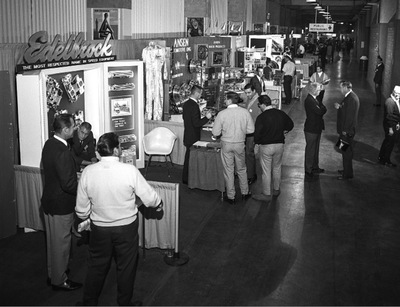 Dodger Stadium’s Club level turned into a trade show January 10–12, 1967. That’s Vic Edelbrock Jr. manning the Edelbrock booth, which is next to a large display for Ansen Automotive.

That lack of experience was evident when Xydias walked the show’s aisles and found the exhibitors sitting in their booths. “I told them, ‘Stand up! You’re not here to rest. This is your business. If you’re sitting down, nobody is going to come over and make you get up to talk about your product.’ Those were the kinds of things we tried to do in the first show, to educate ourselves and also our exhibitors and the people who came to the show.”

Nevertheless, “the show did pretty well, under the circumstances,” Xydias said. Coverage in the February 1967 issue of HRIN called the show “a complete success.”

“We were so surprised at the attendance, which far surpassed what we had hoped for,” Carleton said. “I remember driving to Dodger Stadium on the first day of the show after our set-up day. I saw so many cars parked in the stadium parking lot, I thought there must be another event taking place. I was wrong. All those cars were there for the first SEMA Show.

“Many of the first exhibitors were leery about this show and wondered if they would meet their expenses for airfare, hotel, and so on,” she added. “But they all went home with a fistful of orders, more than they had ever anticipated.”

“Was it a success?” Xydias asked. “It was a success because we had the second one.” The following year, the show moved to the newly opened Anaheim Convention Center, where some 3,800 attendees did business among nearly 200 booths.