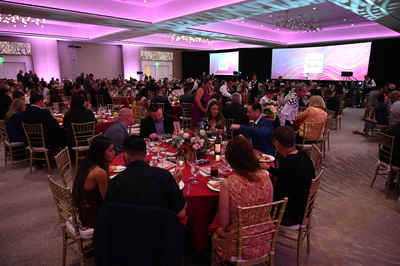 The mood was celebratory at the 2022 SEMA Awards Gala, held July 29, in Anaheim, California. Formerly known as the SEMA Installation Banquet & Gala, the event was renamed this year to refocus on the SEMA Hall of Fame inductees and their industry achievements.

Industry icons, SEMA leadership and volunteers gathered July 29 in Anaheim, California, to honor the association’s new Hall of Fame inductees at the 2022 SEMA Awards Gala. The celebration took place at the Westin Anaheim Resort, not far from the Anaheim Convention Center, a place of historical significance for the association.

“The SEMA Awards Gala is a great opportunity for the industry to come together at mid-year to connect in person and have meaningful conversations in an intimate setting,” said SEMA President and CEO Mike Spagnola. “Our roots extend to the city of Anaheim, so it was exciting to return with friends and colleagues to honor industry leaders.” 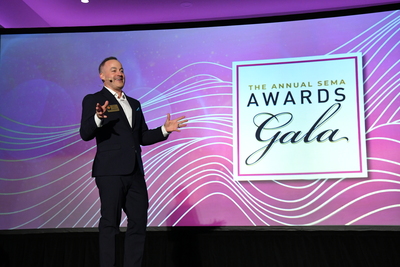 SEMA Chairman of the Board James Lawrence underscored the need for SEMA members to stay engaged and promote the industry’s future. “It’s our responsibility to help give our next generation an opportunity to earn a Hall of Fame spot in the automotive industry,” he said.

Formerly known as the SEMA Installation Banquet & Gala, the SEMA Awards Gala is a long-established tradition where individuals who have made extraordinary contributions to the specialty-equipment industry are recognized. For 46 years the reception and dinner have served as the formal event where new SEMA Hall of Fame inductees are introduced, the incoming Board of Directors is recognized, and outgoing Board members are thanked. SEMA council, network and industry leaders are also applauded during the course of the evening.

“We were excited to have our summer gala return to Southern California, and even more excited at the event’s rebranding as the SEMA Awards Gala to amplify our Hall of Fame celebration,” said SEMA Special Events Director Jamie Ericksen. “This year’s venue, the Westin Anaheim, was a brand-new hotel in the city that recalls the roots of past SEMA events, including early SEMA Shows. It was a homecoming that brought together the industry family.” 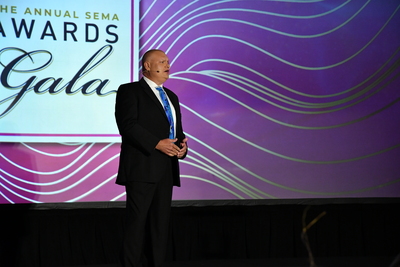 Well-known industry media host Kevin Oeste emcee’d the evening’s festivities which, along with the Hall of Fame awards, included the recognition of new and outgoing SEMA Board members, and accolades to council and network volunteers.

The gala also represented yet another milestone as the industry continues turn a new corner after the recent pandemic. In many ways, it served as a ramp-up for this November’s SEMA Show as industry businesses enter the final stretch for the blockbuster trade event in Las Vegas.

Popular automotive media personality Kevin Oeste served as emcee for the evening. After setting a celebratory tone, Oeste turned the stage over to SEMA Chairman of the Board James Lawrence, whose opening remarks touched on the themes of service, enthusiasm and achievement.

“Tonight, we honor our Hall of Fame Inductees, our new incoming Board of Directors, and thank our outgoing Board members for their service,” said Lawrence. “And to all of our volunteer leaders, our network and councils, chairs and chair elects—we appreciate your hard work and commitment for automotive enthusiasts everywhere.” 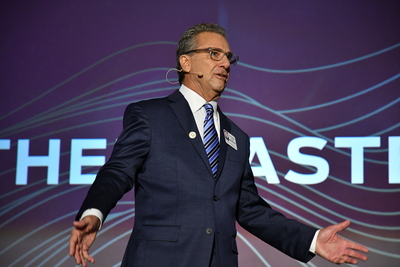 SEMA President and CEO Mike Spagnola outlined the bold initiatives SEMA is taking to meet today’s unprecedented challenges. “We will focus on ensuring the success and prosperity of our members, the automotive aftermarket industry, and the rich and historic automotive culture we all enjoy,” he promised.

Calling the past year a period of transformation requiring grit and effort, Lawrence also thanked the SEMA staff under the leadership of recently named SEMA President and CEO Mike Spagnola for their contributions to the industry.

Turning to the Hall of Fame inductees, Lawrence observed, “When you scroll through the names in the Hall of Fame, you’ll see trailblazers, renegades, leaders and innovators. The legend of tonight’s new inductees—Gene Winfield, Walker Evans and Jack Roush—glows bright for their lifetime achievements.” 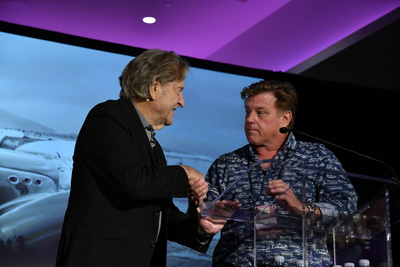 Following on Lawrence’s remarks, Spagnola presented an update on the association’s mission and initiatives to ensure the industry’s health and growth far into the future. Spagnola, who took the helm on an interim basis after the recent retirement of former SEMA President and CEO Chris Kersting, has now been confirmed to the full CEO role by the Board of Directors.

“The last time I was on stage for a SEMA event, I was accepting an award—that was in 2010. Three years later I sold my business, concluded my second term on the Board of Directors and signed a three-year contract with SEMA to develop the first SEMA Garage. Now, nine years into my three-year contract, I’m still here,” he quipped.

Calling himself a “hands-dirty, industry guy,” Spagnola explained, “Those of you who know me know this industry holds a big place in my heart and the hearts of my family.” He went on to reaffirm the association’s goals to produce world-class events that promote meaningful connections, share knowledge and education, provide access to industry-leading product data, advocate for effective legal pathways to enjoy modified vehicles forever, and provide membership opportunities that deliver “real value for all of us who thrive in the automotive culture,” including through a new SEMA Individual Membership program.

“SEMA’s purpose and mission statement are also being held up to the light—we will focus on ensuring the success and prosperity of our members, the automotive aftermarket industry, and the rich and historic automotive culture we all enjoy,” he promised.

With those introductions made, the Gala turned to its main focus: SEMA’s 2022 Hall of Fame inductees. The Hall of Fame awards honor those who built the specialty-equipment market into the $51 billion powerhouse it is today. Since 1969, SEMA has inducted some 170 pioneers. For 2022, it added three more iconic names: Walker Evans, Jack Roush and Gene Winfield. 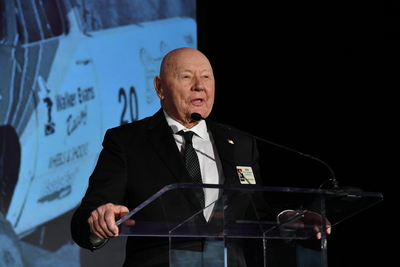 Hall of Fame inductee Walker Evans reflected on his career as a racer and successful performance parts maker. His contributions to off-road motorsports—not to mention the truck world in general—have made him a true industry trailblazer.

If you love trucks, you owe a debt of gratitude to Walker Evans. Before he won the 1979 Baja 1000 in a ’78 Dodge pickup, trucks were largely relegated to towing the buggies and bikes that won the event every year prior. Starting as a driver for famed builder Bill Stroppe, Evans eventually set up his own shop building some of the most competitive trucks in off-road motorsports. At the turn of the millennium, he switched gears to develop and manufacture a line of performance products. Today Walker Evans Racing is a fixture across the off-road spectrum from Jeeps to snowmobiles. 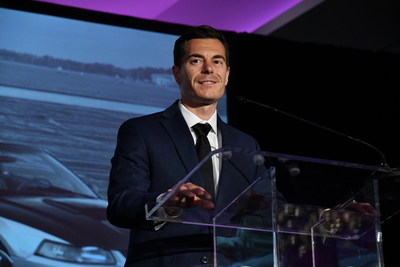 With Jack Roush unable to attend the Gala dinner, his colleague Raymond Gallagher accepted the Hall of Fame induction on Roush’s behalf. Roush is renowned for his engineering entrepreneurship, which has spanned automobiles to aerospace.

It’s impossible to describe Jack Roush with any single title. His parent company has three units. Roush Performance develops and sells performance vehicles and aftermarket performance parts. Roush CleanTech develops clean-fuel solutions for fleet vehicle applications. Roush Industries designs, engineers, prototypes, tests and even manufactures across industries the mobility, aerospace, defense and theme-park industries. But it all began with OEM engineering jobs that morphed into a brief stint as a multi-championship drag-racing enterprise. If Jack Roush hasn’t done it, it’s probably not worth doing.

Few people have inspired a more diverse array of automotive enthusiasts than Gene Winfield. A customizer of the first order, his career spans more than seven decades to include the golden age of the custom car. Scale-model manufacturers rendered his creations in miniature and, after recognizing his widely ranging talents, ultimately hired him to create full-scale examples. Soon the entertainment industry caught on to Winfield’s magic, giving him yet another career building for Hollywood—a professional arc that culminated in his shop building the automotive props for big-budget productions like Blade Runner and Back to the Future II.

During the Gala, SEMA Chairman of the Board James Lawrence and SEMA President and CEO Mike Spagnola together took the stage to thank outgoing SEMA Board members Chris Douglas (Edelbrock Group) and Less Rudd (Bob Cook Sales). Rudd now becomes the Board’s treasurer.

The following Board members were also recognized as they continue their current terms in office: 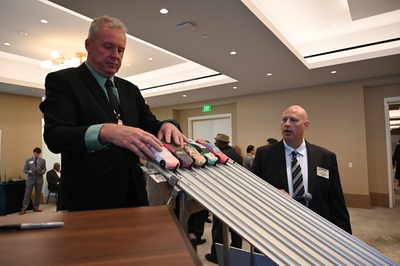 Pinewood race cars get set for a run. The annual Pinewood Drags in support of SEMA Cares children’s charities have become a popular Gala tradition, with stakes running high for the ICC Challenge.

Each year, the SEMA Cares Pinewood Drags fundraiser takes place in conjunction with the SEMA Awards Gala. The charity event offers participants the chance to sponsor a Pinewood race car or challenge colleagues head-to-head during the pre-banquet reception.

Donations enable SEMA Cares to help significantly improve the lives of children in need through the work done by the Austin Hatcher Foundation for pediatric cancer; Childhelp for the prevention and treatment of child abuse; and the Victory Junction camp for children with serious medical conditions. The following were this year’s top winners.

Build It for Me Class

SEMA Board member Kathryn Reinhardt, who serves as the chair of SEMA Cares, commended Gala attendees for their generous support of the races and SEMA Cares in general.

“You may not know this, but these charities have helped save and impact the lives of thousands of children every year,” she said. “Knowing the automotive aftermarket is banding together to be a driving force in making a difference warms my heart. Last year we raised a quarter of a million dollars—our largest fundraising year ever.” 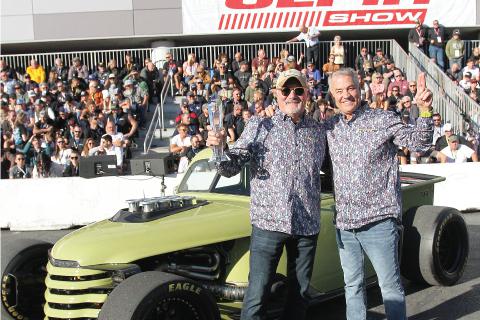 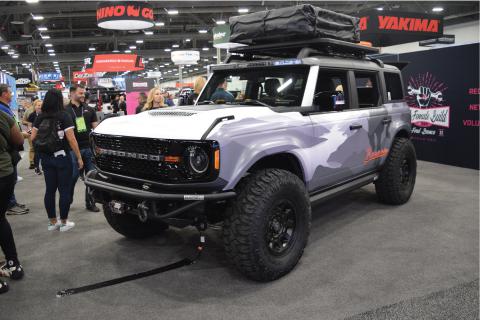