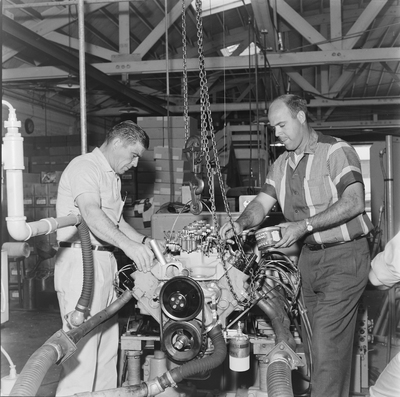 In 1958, Ford introduced the FE V8 engine series, named for its intended use in Ford and Edsel passenger cars. Vic Edelbrock Sr., who built his namesake speed equipment business engineering parts for Ford’s Flathead V8, “took an immediate interest in the new Ford engine,” said Hot Rod’s Ray Brock. So did Edelbrock’s customers, who asked about the engine’s power potential and modifications needed to get there. Edelbrock bought an Edsel version of the FE, measuring 361 ci and rated at 303 hp and 405 lb.-ft. of peak torque, and embarked on a series of tests to see just what the engine was capable of. He invited Brock to cover the tests, which resulted in a two-part series, “Full House for ’58 Fords,” in the August and September 1958 issues.

“Edelbrock didn’t realize when the test started that they would spend nearly eight weeks on the dyno and perform 30 separate and complete tests before they were through,” Brock wrote.

Out of the crate and in full stock trim, the engine produced 210 hp and 315 lb.-ft. of torque as measured on Edelbrock’s Clayton engine dynamometer.

Thirteen of the 30 tests were covered in the first story, which culminated in the engine making 290 hp. Some changes made just incremental improvements; some changes actually reduced power. The biggest gains were seen when a set of Hedman headers was added, when Edelbrock replaced the 84-lb. (!) stock intake manifold and single Holley four-barrel carburetor assembly with an aluminum Edelbrock intake and triple Holley two-barrels (weighing just 43 lbs.), and when Ed Iskenderian delivered several different camshaft grinds to test. The photo seen here shows Edelbrock (left) and Brock installing the new induction system.

Part 2 began with Edelbrock addressing what he thought was the engine’s weak point: its “puny,” as Brock described them, 1.561-in. exhaust valves. Edelbrock installed a set of 1.750-in. Lincoln valves and did some machine work on the heads to accommodate them. That change alone didn’t net much power, but when combined with headers, bigger Stromberg carburetors and increasingly aggressive camshaft grinds, the engine finally climbed above the 300hp mark. Brock noted, “112 horsepower for an increase of 54% without removing the engine from the car is pretty good.”

But “pretty good” was not what Edelbrock was after. He disassembled the engine, bored the block and had a stroker crankshaft made to increase displacement to 412 ci. Initial tests at the new size retained the bolt-on speed equipment but returned the stock camshaft to the block to better evaluate the more aggressive cams Isky had provided. In its final trim, for test number 30, the engine was fitted with Isky’s EE-400 cam, with .430-in. lift, 264 degrees of intake duration and 272 degrees on the exhaust side. “Above 3,000 rpm the EE-400 supplied the needed extra timing, and the power soared to 341 hp at 5,000 rpm and then remained almost constant with 342 hp registered at both 5,500 and 6,000 rpm,” Brock wrote.

“The results were interesting,” he said, “and did prove that the ’58 Ford (and Edsel) engine can be a good workhorse if properly groomed.”