Emissions Control at a Glance

During routine emissions testing, problems identified at the tailpipe are most likely to have originated within the engine assembly, so understanding how each component of that assembly can affect emissions levels is essential to any successful test regimen.

Emissions compliance is the fundamental legal issue facing the engine and performance aftermarket. It governs virtually every component that alters the delivery of fuel and/or air into or out of the engine, as well as products that impact the functionality of OE emissions-control systems. While enforcement may fluctuate depending on the direction of the political winds in Washington, D.C., the likelihood that aftermarket manufacturers are apt to encounter more stringent emissions-control regulations in the future is high, so understanding emissions and the effect that a vehicle’s many powertrain components can exert on them before they exit the tailpipe is essential when designing parts and systems that will need to obtain certification before they can be brought to market.

A recent SEMA Education webinar, “Emissions Formations and Aftertreatment for Gasoline Engines,” provided an introductory view into the subject. Hosted by Robert Prucka, the Alan Kulkwicki professor of motorsports engineering at Clemson University, the webinar covered topics including catalytic-converter operation, spark timing and advance, exhaust gas temperatures, cylinder deactivation, and the effects each has on tailpipe emissions.

Before Testing: Six Things to Know 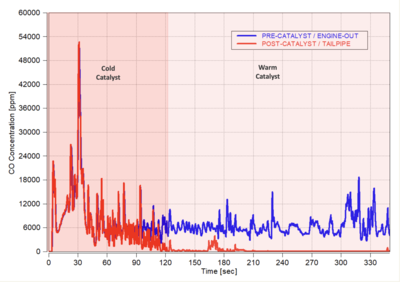 During cold-start operation, engine emissions output and catalyst emissions output are close to an exact match. As the catalyst warms up over the course of two to three minutes, it works more effectively at capturing engine output. This is important to know because the catalyst can be made to warm up more quickly, albeit at the expense of performance trade-offs elsewhere.

When problems arise during emissions testing, the catalyst, or catalytic converter, is often looked at as a culprit. But that observation runs the risk of misinterpreting the catalyst’s function, and it can lead technicians to reach faulty conclusions. Put another way:

What goes out of the catalyst is a function of what goes into the catalyst. If tailpipe emissions evidence excessive levels of carbon monoxide (CO) or oxides of nitrogen (NOx), it’s likely because the engine is producing excessive quantities of these emissions. While it does have some storage capability, “The catalyst itself is a passive device. It doesn’t have any control of itself,” Prucka observed, adding that, in the case of a failed emissions test, “we need to study engine-out emissions first, because that’s going to help us understand what’s going on inside the catalyst.”

The catalytic converter must be hot in order to deliver optimal emissions control. “When the catalyst is cold, it doesn’t function very well,” Prucka noted. “It doesn’t pick up a lot of activity until it gets into the 200º–250°C range. Until then, “the input matches the output” until an operating temperature of 450°C is reached, at which point the catalyst begins to function most efficiently. “It’s definitely an area you need to work through during cold-start testing.” 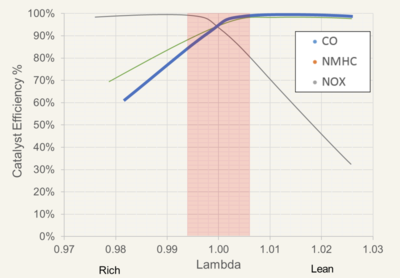 Once the catalyst has warmed up, air-fuel ratio becomes determinative in emissions control. A too-rich air-fuel mix effectively traps NOx but is less efficient with CO and HCs. Too lean a ratio, and an air-rich exhaust environment provides the oxygen that NOx needs to thrive.

While OE and Tier-1 manufacturers have made big improvements in making catalyst operation more efficient over the years, “if the after-treatment system is not active, you have to be careful not to fail the emissions test in this period of time,” Prucka said. “It may only be a minute or less, but during that time, the emissions regulations can be such that you can actually fail, so you need to pay extra attention to air-to-fuel ratio control and overall engine control to make sure that you don’t have an emissions issue during cold start-up.” Once the catalyst has warmed up, however, a car’s after-
treatment system works remarkably well, with efficiency ranges of up to 99%. At its normal operating temperatures, the catalyst is able to properly oxidize emissions such as hydrocarbons (HC) and CO.

“The overall strategy,” Prucka said, “is to get the catalyst warmed up as quickly as possible.”

Air-to-fuel ratio and its control are the most important factors to consider for controlling tailpipe emissions. Once the catalyst is warmed up, air-fuel ratio becomes crucial, with a proper balance needing to be struck between lean and rich running conditions.

“If you’re operating lean, you’ll have a lot of oxygen that ends up in the exhaust,” Prucka explained. “In those lean conditions, it’s very difficult to get rid of oxides of nitrogen (NOx).” NOx includes oxygen, so an oxygen-rich environment in the exhaust “makes it difficult to break that molecule apart. The trick is to put it in an environment where it doesn’t have much nitrogen or oxygen.” 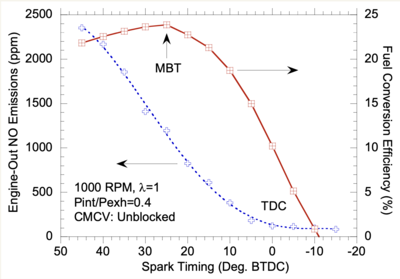 Spark timing has a direct effect on NOx emissions. The blue curve here represents NOx emissions during a spark sweep, with throttle, intake-manifold pressure and air-fuel ratio constant. The greater the spark advance, the greater the amount of NOx emissions. On the other hand, retarding spark can result in loss of power and efficiency, represented by the red curve.

Burning a rich air-fuel mix, by contrast, reduces the level of oxygen in the exhaust. That is great for trapping NOx but less so for HC and CO, which both need to be oxidized. “Here, we’re looking to combine these species with oxygen—to take the hydrogen out of hydrocarbons and turn them to water, and to add oxygen to CO to turn it into CO2,” Prucka said.

The solution to this conundrum, Prucka said, is a certain amount of “dithering”—alternating between rich and lean ratios during operation. “That allows you to do high conversions of both types of species—the kinds you need to oxidize, like CO, and the kinds you need to reduce, like NOx.”

Still, complications can arise. Hydrocarbons in particular can escape combustion through imperfections in the valvetrain (notches, pitting), and because of that, hydrocarbon emissions can actually increase in excessively lean (oxygen-rich) fuel conditions. “There’s a lot of chemistry involved,” Prucka admitted, adding that “it’s a balancing act.”

Spark timing has strong influences on NOx and exhaust gas temperatures. As spark timing is advanced, peak cylinder pressure will go up “because you’re releasing so much heat toward top dead center at a very small volume that you’re getting high cylinder pressures and very high temperatures,” which act as an incubator for NOx production. On the other hand, delayed spark timing can result in loss of torque and fuel efficiency. “You’ll have to deal with NOx emissions that come out of the engine at the catalyst and the tailpipe,” Prucka said, “so your air-fuel ratio has to be spot-on.” 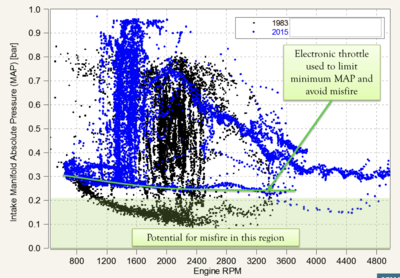 Throttle tip-out conditions are another consideration, particularly among older engine and powertrain types. When intake and exhaust manifold pressures are too mismatched (such as occurs under sharp throttle back-off), misfires can occur, which increases CO and HC emissions. By contrast, modern electronically controlled throttle systems do a much better job of aligning manifold pressures to minimize this condition.

The challenge here, though, is that the engine will run more roughly with a delay in combustion phasing—and with that, engine-out emissions (and HCs in particular) will increase, which could in turn trigger a failed emissions test. “This is a challenge that you’ll run into, “Prucka conceded.

Proper engine control during throttle tip-out and other engine shutoff conditions is also important. Other issues that can arise during emissions testing include imbalances in manifold pressures resulting from conditions such as throttle tip-out or other fuel cut-off events.

“When intake manifold pressure, or load, gets very low with exhaust pressure still around ambient [full throttle] position, you actually have flow from the exhaust into the cylinder during the valve overlap period, and from the cylinder into the intake,” Prucka noted. These are exhaust gases or “internal residual” gases that have reentered the combustion chamber, and they have the effect of diluting the existing combustion gases, causing rough operation and potential misfires.

“You’ll end up with higher CO and HC emissions” under this condition, Prucka said, and because you’re sending so much heat into the catalyst, you can potentially overheat it. This condition is more prevalent among older vehicles, as modern electronic throttle-control systems do a much better job of regulating manifold pressures, holding the throttle open artificially to make sure intake pressures don’t dip too precariously—“and if they do dip, the vehicle probably has ignition shut-off, anyway.”

SEMA recently introduced a new program to enable aftermarket parts manufacturers to meet the legal requirement for emissions compliance under the EPA’s Tampering Policy. The program, called SEMA Certified-Emissions (SC-E), gives manufacturers the ability to verify that a product meets the EPA’s “reasonable basis” criteria and is therefore legal for sale in 49 states. Manufacturers now have an accelerated path to compliance and can begin selling products legally in 49 states prior to receiving a California Air Resources Board (CARB) Executive Order (EO), which is still a requirement for selling products in all 50 states.

“SC-E gives manufacturers much greater options and opportunities,” said Peter Treydte, SEMA director of emissions compliance. “This is a significant milestone in the industry’s ability to provide products to consumers. We look forward to working with members and helping them go to market with SEMA Certified-Emissions products.”

The new SC-E program is comparable to CARB EO requirements. SEMA staff will assess manufacturers’ needs and advise as to the most appropriate path forward, whether that includes applying for a CARB EO or SEMA emissions certification. SC-E is also ideal for products that may not have a clear path in the CARB EO process (e.g., flex-fuel modifications, HCT-equipped intakes and engine packages).

The SEMA Garage and SEMA Garage Detroit are both available to auto parts manufacturers for all their product development needs. For more information, visit www.SEMAgarage.com.