Mustangs on the Salt 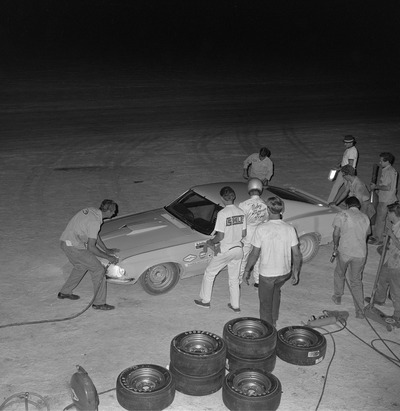 Hot Rod magazine Publisher Ray Brock picked up the phone. Mickey Thompson was on the line, calling from Detroit.

“How would you like to drive a car with me at Bonneville to set some international and national endurance records?” he asked. Thompson was at Ford headquarters and had just made a deal to take a team of ’69 Mustangs to Bonneville “and go for a bunch of speed records on the 10-mile oval as well as the straightaway.”

“And that’s how I ended up at Bonneville last July, spinning out at 170 mph in the middle of the night,” Brock recounted in his October 1968 cover story titled, “At Least I Got My Name on the Door.”

Spoiler alert: Thompson and racer Danny Ongais did set records in a 302-powered Mach 1 (seen here during a pit stop). But 24-hour record attempts planned for the yellow 302 car and a red big-block Mustang were called off due to poor salt conditions. Brock and fellow journalist Bob Ottum (on assignment for Sports Illustrated) never got their turns behind the wheel, which explains Brock’s self-deprecating story title.

How did Brock find himself doing 360s in the dark?

“Actually, it wasn’t my first spin,” he admitted in the story. “There had been three or four more, but they had been during the daylight hours when I could watch the mountains spin around. At night, you don’t have the least idea of what’s happening or how to correct the spin—just salt flying around in the headlight glare.”

During practice runs ahead of the record attempts, Brock had trouble controlling the Mustang around the oval’s turns due to the slippery wet salt. Here’s how he described one such excursion, in daylight, at 165 mph:

“Here comes the south turn—keep the throttle steady, let the tail end slide out a little, now correct and catch the slide. Oh-oh, lost it—no, I caught it, lost it again, overcorrected—here we go, Danny. [Ongais was riding shotgun.] Get the clutch in before you get backward so the engine doesn’t back up and catch on fire. There go some more stakes [marking the course]. I’ve heard of tornadoes driving straws through trees; wonder if one of those stakes would go through the side of a car at this speed. Guess not; just mowed down about four of them. Let’s see, they’re 100 feet apart; boy, this sure is a long slide!”

Ottum didn’t fare any better. “I couldn’t even make one lap, and I was only doing around 140,” he told Brock. “I spun it around and around. There aren’t going to be any stakes left to show you where the course is if I keep driving.”

The two journalists weren’t the only ones having trouble with the wet surface. Ongais spun when Brock was riding with him in practice. And when Thompson was on course during a nighttime record run and had settled into a 165-mph pace, “every so often there would be a variation of a couple miles per hour, which indicated that the car was getting sideways on the rough south turn,” Brock wrote. “Mickey didn’t lose it, though. Have to hand it to him; he sure knows how to drive on the salt.”

By the time the record runs were called off and Ongais pulled the yellow Mustang into the pits at the 500-mile mark, “all Class C International and National records had been broken to that point,” Brock reported. “The average was 159.556 for the 500 miles.”