The Hot Breath of High Performance 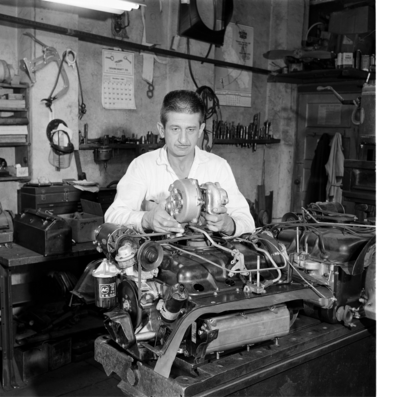 Barney Navarro was best known as a speed-equipment pioneer in the years immediately after World War II. He was a dry-lakes racer before the war, studied Ford engine components while he served in the Army Air Corps, and used that knowledge to produce flathead intake manifolds, cylinder heads and other products sold by Navarro Racing Equipment.

Those who knew him describe Navarro as a talented machinist with a pragmatic mind and a thirst for knowledge. He credited his favorite quote to his high school science teacher: “There’s nothing more fun than learning.” That largely explains why his accomplishments stretch beyond the automotive performance industry to include inventions as diverse as a heart-lung machine and concrete-cutting equipment.

In the early ’60s, Navarro’s inquisitive mind turned to turbocharging, which, at the time, had been used primarily in aircraft and diesel applications.

“The general public did not become aware” of these so-called turbosuperchargers, Navarro wrote, “until World War II, when they appeared in all high-altitude bombers.” He was explaining the concept of “putting your exhaust to work” in a January 1962 Hot Rod article he wrote called “Hot Horsepower.”

Since “most of the heat energy liberated by the burning of gasoline within an engine flows out the exhaust pipe without contributing one bit to ‘turning the wheels,’ it is most reasonable to believe that some effort should be made to tap this energy source,” he wrote. His proof of concept was a Corvair to which he fitted an AiResearch turbocharger originally designed for a diesel engine. The caption that ran with this photo in the magazine described Navarro “contemplating mounting possibilities on a spare engine.”

Navarro’s use of a turbo in a Corvair predated Chevrolet’s turbocharged Corsa engine by several years, so his was a completely clean-sheet design. For his first attempt, he mounted the turbo under a fender where the muffler was originally housed, and he piped the boosted air up to the stock air cleaner.

“Though there were skeptics present when the turbo was being fitted to the exhaust system, those who drove the machine rapidly became ‘converts,’” Navarro wrote. The car—equipped with a Powerglide automatic transmission—accelerated to 60 mph in 12.8 seconds instead of the 19 seconds in stock tune.

“A 32-percent grade was climbed at 35 mph as compared to a struggling 15 mph in the stock state,” he said. “This impressive transformation was brought about by a mere 7 pounds inlet boost…by no means the maximum available but was selected arbitrarily when the diaphragm regulator was adjusted.”

In a later iteration, Navarro mounted the turbo on top of a hotter, modified version of the flat-six engine, replacing the carburetor. A Nash side-draft carburetor introduced fuel to a system of ram-induction pipes that fed the cylinders, while piping under the car routed exhaust gas to the turbo. At the dragstrip, this setup “demonstrated a surprising quarter-mile speed of 84.5 mph”—a speed hampered, Navarro noted, by the two-speed Powerglide.