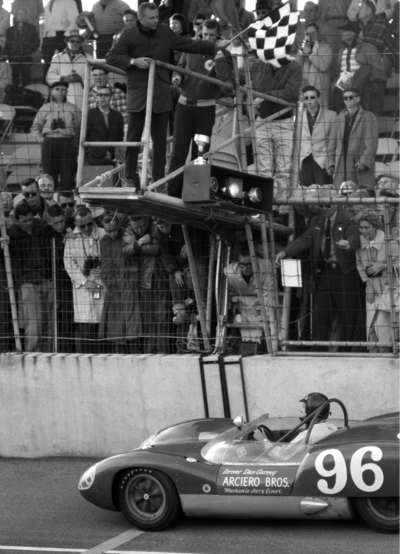 Sixty years ago, what we know now as the Rolex 24 at Daytona began as the three-hour Daytona Continental. It was the brainchild of NASCAR’s Bill France, Sr., and was intended to bring the world’s best sports and road-race cars to his Daytona Speedway.

The Daytona Continental was sanctioned by the Fédération Internationale de l’Automobile (FIA) as the first race of the 1962 World Sportscar Championship season. As such, it drew an entry list that read like a who’s who of mid-century racing talent, from Phil Hill, Stirling Moss and Jim Clark to A.J. Foyt, Fireball Roberts, Jim Hall and Roger Penske.

Hill, sharing a Ferrari with Ricardo Rodriguez, finished the race in second place. Hall, driving a Chevy V8-powered Chapparal, finished third. Dan Gurney, who at the time was a Formula 1 driver for Porsche, won the Continental in a Lotus 19 powered by a Coventry Climax engine.

But that factual recounting doesn’t capture the drama of what actually happened. Jack Brady, writing in the May 1962 issue of Sports Car Graphic magazine, said that if Hollywood were making a movie about the race, its ending “would rate an immediate thumbs-down as being utterly improbable.”

Let’s set the scene: In the first half of the race, “Gurney never lost sight of the number-one spot and swapped places with Phil Hill on several occasions,” Brady wrote. “The amount of acceleration displayed by Gurney’s Lotus was almost unbelievable,” he said, crediting the “loving care lavished on the aging Lotus 19” by its chief mechanic.

All that changed on the last lap.

“With almost a four-mile lead over Rodriguez, Gurney approached the final turn riding midway up the banking.” As Gurney came through the turn, there was a “tell-tale whisp of smoke, followed by a rush of steam.” Post-race examination “showed that a piston had disintegrated, and the connecting rod and wristpin had beaten a fist-sized hole in the block.”

Though Gurney kept control of the wounded Lotus, “he still had over 1,200 feet to go for the start-finish line, with very little assurance that his lead was sufficient to wait out the clock.”

Gurney coasted to the wall under the starter’s stand, “10 feet from the white line. FIA rules no longer permit the car to be pushed on the course, so he had to get the Lotus across the line under its own power.”

The grandstand behind the finish line “went wild” while Gurney waited tensely. “The end of the three hours was signaled by a wildly waving flag, and he skittered across the finish line on the starter motor,” Brady said. “The number two and three cars were in the same lap at the finish, but not quite close enough.”