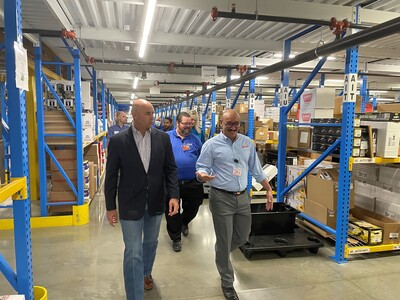 What happens when you send a former fighter pilot to Washington? While it may be premature for the citizens of Texas’ 6th Congressional District to answer that question, they have every reason to be optimistic about U.S. Representative Jake Ellzey (R-TX) who won a July 2021 special election to represent them in Congress.

SEMA was excited to get to know Rep. Ellzey, as he recently took time to visit Summit Racing Equipment in Arlington, Texas, for a tour of their retail super store, order fulfillment center and distribution center—all totaling nearly 1 million sq. ft.

Summit Racing has come a long way from its humble beginnings, as its first “store” was in the basement of a donut shop in Stow, Ohio. The company was founded by a young engineer who owned a big-block-powered ’67 Corvette Roadster and had a knack for getting performance parts at a good price. It didn’t take long for his fellow drag racers to start inquiring about deals on hop-up parts out of which a side business was born, and the company moved to its first true store—a 1,500 sq. ft. location in Cuyahoga Falls, Ohio, in 1969.

Today, Summit Racing is widely recognized as a leading direct marketer of performance automotive parts and accessories. While Summit Racing is headquartered in Tallmadge, Ohio, the company has three other facilities, including locations in Sparks, Nevada (opened in 1998); McDonough, Georgia (opened in 2006); and Arlington (opened in 2017), their largest facility. Each location features a destination retail super store, an order fulfillment center, a customer support center team, and enthusiasts who are passionate about their customers’ projects.

Rep. Ellzey’s visit to Summit Racing provided the Congressman a chance to learn more about the specialty automotive aftermarket and the role the industry plays in Texas’ 6th Congressional District, which is located both to the south and west of Dallas and includes parts of Fort Worth and Arlington. While touring the super store, the Congressman spoke fondly of the ’67 Mustang he once owned. He also aspires to one day restore a vintage Ford truck that’s been in his family for more than 40 years.

“The tour of Summit Racing was nothing short of remarkable,” said Rep. Ellzey, “You all have a tremendous facility, but what was most impressive was all of the employees. The afternoon I spent there, I could tell that everyone cared about their job, each other and the customer. I am glad that Summit Racing is in our district. It is something we can all be proud of, and I look forward to rebuilding my ’79 F-150 with a little bit of help.”

Rep. Ellzey grew up in Perryton, Texas, and he maintains that he wanted to be a fighter pilot since the age of seven when his father took him on his first plane ride. The Congressman is a graduate of the U.S. Naval Academy and throughout his 20-year Naval career Rep. Ellzey flew H-60 helicopters, F-14 Tomcats, F/A-18 Hornets and Super Hornets in defense of our nation. His service included 830 carrier landings and a tour embedded with Navy SEALs and called in air support in 2006 in Anbar Province, Iraq. After retiring from the military, he was a private pilot, civilian contractor and worked as a White House aide under President George W. Bush. Rep. Ellzey also founded and ran a public speaking and executive coaching firm and was appointed by then-Gov. Rick Perry to serve as a commissioner of the Texas Veterans Commission, serving from 2012 until 2018. Rep. Ellzey was elected to the Texas State Legislature in 2020 before winning a seat in the U.S. House of Representatives just nine months later.

Rep. Ellzey currently serves as a member of the U.S. House Committees on Veterans’ Affairs and Science, Space, and Technology. The Congressman’s top priorities include supporting military veterans and our armed forces, protecting private property rights, and reducing federal spending and debt reduction. Upon learning about the Recognizing the Protection of Motorsports Act (RPM Act), Congressman Ellzey agreed to co-sponsor the legislation and is passionate about enacting the bill into law given the importance of the issue to his constituents. 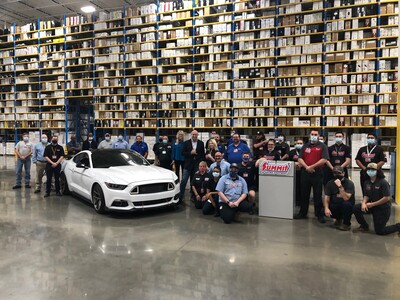 “We appreciate the opportunity to showcase our enthusiast-based company culture and our outstanding team at Summit Racing, especially in support of initiatives that protect our industry,” said Dave Ritchey, Summit Racing’s Manager of Phone Sales. “Thank you to SEMA for organizing and participating in the meeting, and to Rep. Ellzey for taking the time to visit and get to know our company, and for reinforcing his support for the RPM Act. Supporting this bill helps protect the livelihood of our company and employees, our business partners, and race tracks throughout the country.”

For more information on planning your own Congressional District Site Visit, contact Eric Snyder in the SEMA Government Affairs office at erics@sema.org.