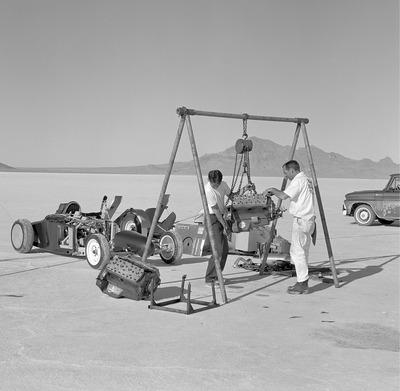 The 1968 running of the Southern California Timing Association’s (SCTA) Speed Week at Bonneville marked the 20th time hot rodders had gathered at the Salt Flats to see just how fast their roadsters, lakesters, streamliners and other wheeled creations could go. Hot Rod dispatched Photo Editor Eric Rickman, himself a 20-year Salt Flat veteran, to cover the event. He opened his story in the January 1969 issue with this timeless image of Bob Westbrook swapping Flathead engines right on the lakebed.

The anniversary meet almost didn’t happen. Rain forced the cancellation of the original August dates, but the alternate days the SCTA booked in October were blessed with “clear skies, brisk mornings and shirt-sleeve afternoons,” Rickman wrote. “Brisk, in this case, is a euphemistic way of saying ‘below freezing.’”

Just “57 cars and 20 cycles” turned out in October—nearly 150 had planned to go in August—but this “rather exclusive group was able to rack up some 26 car records and 13 cycle records,” Rickman noted, and saw three new members join the 200 MPH Club.

Among the record-setters was Westbrook, who had previously set the FI/Modified Roadster class record of 157.859 mph in 1966. He and one other FI/MR entrant, Tom Windgate, found themselves in a “really close race,” Rickman said, as they qualified at speeds just .28 mph apart.

“Experience will tell, and Bob took the record at 162.241 mph—on a borrowed engine yet,” a loan that set the stage for Rickman’s iconic photograph. That speed, Rickman said, “was really hauling for the nearly extinct Flathead.”