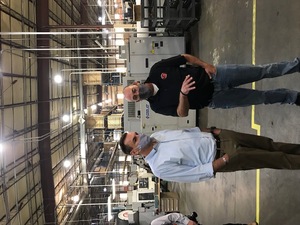 What does a company do when its member of Congress is already an ally of the industry? That’s easy. Invite him or her to your business! While U.S. Representative Richard Hudson (R-NC) is a fierce defender of motorsports parts businesses and a longtime SEMA ally, a recent visit to Edelbrock provided the Congressman with a chance to see another side of the industry beyond racing.

Rep. Hudson visited Edelbrock’s facility in Sanford, North Carolina, and met with company employees. While SEMA has worked closely with Rep. Hudson to protect racing and motorsports parts businesses since 2016, the Congressman was interested in learning more about Edelbrock and the other facets of the industry, including the classic-car and restomod segments.

Edelbrock General Manager of East Operations Todd Belcher and Edelbrock Director of Compliance and Calibration Engineering Braden Liberg provided Rep. Hudson with a behind-the-scenes look at how the company manufactures its AVS-2 and Performer carburetors, EFI throttle bodies, pumps, regulators and several other products that are produced and assembled in Sanford. The Congressman also got a firsthand look at Edelbrock’s processes for assembly, quality control and packaging its products.

“I really enjoyed my tour,” Rep. Hudson said. “Edelbrock is an incredible company with a real legacy. I’m proud that this is happening right here in Sanford. I think the people in this community would be proud if they knew the kind of innovation and skill and the world-class products that are being made here.”

After the tour, Rep. Hudson spoke with Edelbrock’s employees. He talked about the importance of the automotive specialty-equipment aftermarket and discussed key issues he’s been working on that impact the industry. He spoke at length about the significance of the Recognizing the Protection of Motorsports Act of 2021 (RPM Act) and the importance of passing legislation that prohibits the regulation of race parts and combats government overreach.

“It’s important for us to have representatives who get involved,” Belcher said. “When someone from Washington makes a visit like this, it lets us know that they’re in it for the right reasons, not just to have a job in Washington.”

Rep. Hudson is the lead Republican co-sponsor of H.R. 3281, the RPM Act, and has championed the legislation in the House Energy & Commerce Committee. Rep. Hudson vocally pushed back against the EPA when it first claimed authority to regulate race parts, asking then-EPA Administrator Gina McCarthy if she was aware that the agency’s action would decimate the motorsports parts industry.

Rep. Hudson represents North Carolina’s Eighth Congressional District, which stretches from just outside of Charlotte to Fayetteville. Rep. Hudson’s district is in the heart of race country, where racing is a passion and the industry surrounding it employs thousands of his constituents. According to a study commissioned by the North Carolina Motorsports Association, racing generates more than $6 billion annually for the Tar Heel State’s economy and supports more than 27,000 jobs.

As a native of Charlotte, Rep. Hudson grew up watching NASCAR races on Sundays with family and is a passionate race fan to this day. He’s the only member of Congress who proudly displays the hood of a race car on a wall of his office in Washington. 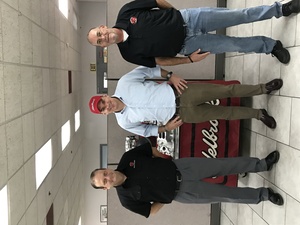 For more information on planning your own Congressional District Site Visit, please contact Christian Robinson in the SEMA Government Affairs office at christianr@sema.org.