By Fredy Ramirez and Carr Winn 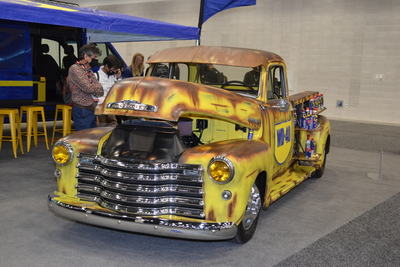 The WD-40 build this year featured a post-World War II design of a Chevrolet 3100.

Giving back to the community has been one of SEMA’s values since the founding of the association. In 2007, SEMA Cares began providing support to the Austin Hatcher Foundation for pediatric cancer as well as Childhelp, an organization dedicated to the prevention and treatment of child abuse, and the Victory Junction camp for children with complicated medical conditions and serious illnesses.

One of the best ways SEMA can support these wonderful organizations is through helping facilitate one-of-a-kind car builds for auction by gathering parts from members in the industry who so kindly donate both their inventory and their time. This year, four vehicles came to fruition and will be auctioned off to the benefit of the charities.

“Trad called us one evening and had the idea to take a regular-bed 3100 and do a fully custom box in the back that would allow us to bring to life the history of our brand and marry that to a service bed that would display our new WD-40 Specialist line of products in a beautiful way,” said WD-40 Brand Events and Content Development Manager Zeb Brown. “A long road lay ahead for this project, but everyone met the challenge with a smile. Although this vehicle didn’t travel thousands of miles to get its upgrades like our previous charity vehicles, it drives just as well.”

Brown said that Airhead design helped with the paint, going for a post-World War II design. The 3100 is now yellow with hints of rustic brown. In fact, the look is reminiscent of the time when blue-collar workers came back home after a long battle.

“WD-40 Multi-Use product was created in 1953, just two years after the truck was made,” Brown said. “We wanted this design to bring people back to that time and also blow the hats off younger auto enthusiasts and aspiring custom builders.”

Although it looks like it rolled off the lot back in the ’50s, the modern driving feel that the builders worked so hard to achieve is evident as soon as you press the gas pedal. Ronefeldt’s custom fabrication massively improved the capability and ride quality of the 3100.

“We also encountered some challenges figuring how to get the dually rear to fit with the runners and not make it look too wide in the rear,” Brown said. “Trad had the simple but genius idea to just flip the stock runners.”

Much of the frame needed custom work, and Ronefeldt fired up the blowtorch to make things a perfect fit. The frame needed to be capable of handling its upgrade. The inline-six that pushed out 92 hp pales in comparison to the 383 V8 stroker engine that pushes out 520 hp. Holley donated parts to allow the engine to run smoothly, and Frostbite took care of cooling the new engine.

All that horsepower means nothing if the vehicle can’t put it down, but not to worry: Currie Axle, Reel Driveline, Toyo Tires and Ultra Wheel Co. came to the rescue. The axle, driveshaft, tires and wheels came together to easily handle that power and put it to the wheels. The 3100’s new owner will be lucky to acquire a such a unique truck while helping a great cause.

“The vehicle will be auctioned on www.bringatrailer.com in early 2022, with all proceeds going to SEMA Cares and Childhelp, the nonprofit organization dedicated to the prevention and treatment of child abuse,” Brown said. “We can’t wait to donate the proceeds to support such a great cause.” 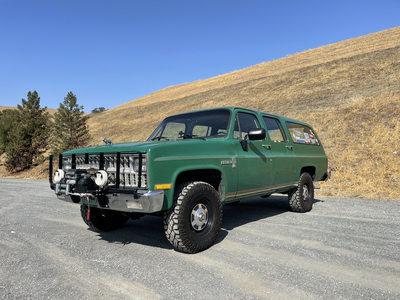 “Big Green” traveled many miles to arrive in California, but when it arrived, it had been modified for improved performance. Photo courtesy: Hemmings Motor News

This ’81 Chevrolet Suburban traveled across the country to be transformed into a vehicle capable of being driven daily.

“We surveyed our readers and watchers, and the number-one thing they wanted to see from us was road trip content,” said Hemmings Motor News President and Publisher Jonathan Shaw. “The show was originally going to take place on the West Coast, but we had so much support for our cause that it’s spread to the entire United States.”

After being picked up from GR Auto Gallery in Grand Rapids, Michigan, the Suburban made its way to Lansing, Michigan, where racer Kevin Wesley and son Parker helped change the first of many parts: the alternator. After the alternator seemed to function properly, a 500-mi. journey followed to Rockford, Tennessee. There, more improvements began at Silver Sport Transmissions.

The team at Silver Sport swapped the old four-speed manual transmission for a Tremec TR4050 five-speed and an NP 205 transfer case. Of course, taking on a challenge like that doesn’t come without some speed bumps, so Big Green hit the road again.

This time, its journey would take it 400 miles to Memphis for the installation of an Edelbrock fuel-injection system. The Suburban received ProFlo 4 electronic fuel injection, an intake manifold, a distributor, plug wires, valve covers and an air cleaner as well as a digital dash at the Comp Cams facility.

“The EFI system and the transmission alone allowed us to travel at modern highway speeds while at the same time improving our fuel economy by more than 35%,” Shaw said. 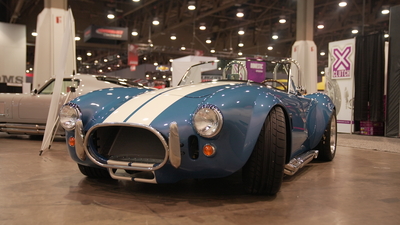 This project build began with a Factory Five Mark IV Roadster kit, which resembles the look of the legendary 427 Cobra.

The next stop took Big Green to Fort Worth, Texas, to receive an air conditioning system from Old Air Products. The A/C proved to work well as Big Green made its way from Texas to California for stops at SEMA headquarters, Air Flow Research and Classic Industries.

“All of us here at Hemmings, along with our SEMA partners, have put a lot of time and effort into this old truck to make it something special,” Shaw said. “Thus, we hope the next owner won’t see it as a collector vehicle but instead as a wonderful old truck that can log another 100,000 miles and then be kept on the road for decades to come.” 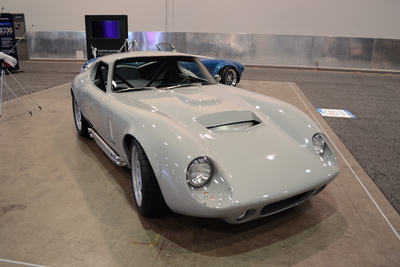 This project build began with a Factory Five Type 65 Coupe kit, which is a replica of the Shelby Cobra Daytona Coupe that won Le Mans in 1964.

The Austin Hatcher Foundation is dedicated to helping children who face one of life’s toughest challenges: a cancer diagnosis. The foundation includes an industrial arts division that partners with organizations like SEMA to provide both experience in a STEM-based trade as well as facilitate activities that can help young patients see beyond their daily health challenges.

At the 2021 SEMA Show, Austin Hatcher proudly displayed two Factory Five vehicles built as part of the foundation’s unique hands-on therapy program. The first of the two was a ’65 coupe attracting plenty of attention with its Bristol Grey exterior and full leather interior. Parked next door was a very special roadster, drawing quite a crowd in its Guardsman Blue and Wimbledon White colors. Both Factory Five vehicles feature powerplants from Ford Performance as well as 3.48 gears connected to five-speed transmissions.

Co-founder of the Austin Hatcher Foundation Jim Osborne explained just how special these builds are to the organization.

“The kids help assemble,” he said. “They get to be part of it, and then these cars, once complete, will be sold at auction to generate funds to help cover more services.”

Osborn said that the foundation is able to offer all its services for free, thanks to the efforts of groups like those involved in the two Factory Five vehicle auctions.

For Osborn, watching the builds come together at the foundation’s Education Advancement Center in Chattanooga, Tennessee, is extremely rewarding. Special thanks also go to their build partners, who helped offset the vehicles’ costs. The Daytona coupe represents a partnership with SATA’s German engineering division, and the roadster was a collaboration with the Kawasaki Foundation. 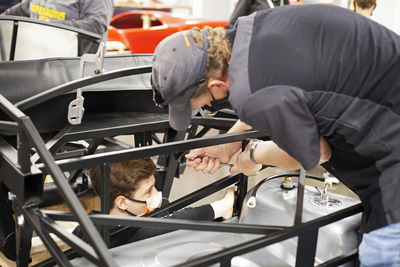 Austin Hatcher Foundation Co-Founder and President Amy Jo Osborne said that there is one additional benefit to the unique nature of this particular therapy for her clients.

“Engaging the kids in this process allows them to build a love of the industry,” she said. According to Amy Jo, the feeling of teamwork is the truly special part of the project. “It’s a therapy that doesn’t feel like therapy, and then they can see a completed project and they’re part of something bigger.”

Each vehicle represents the passion and the powerful commitment SEMA and its members have to create world-class builds as well as support SEMA Cares. If you’d like to see one of these vehicles parked in your garage, donate today. Visit www.sema.org/sema-cares.