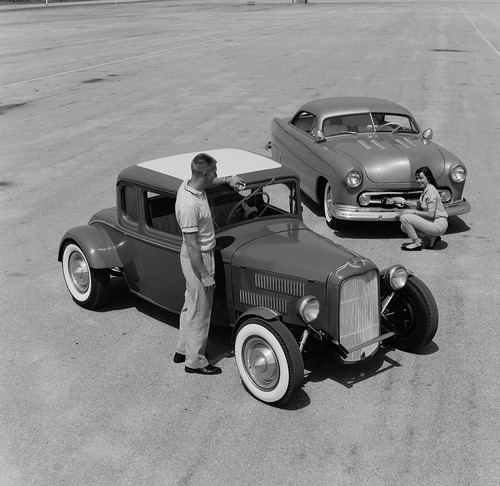 A feature story in the August 1960 issue of Hot Rod showed off two “sharp Fords” that had been customized by “lucky owner” Ron Coleman. The ’32 five-window coupe and the ’51 coupe provide a nice snapshot of styling trends that were popular in the late ’50s and early ’60s.

Eric Rickman photographed the cars, Coleman and his wife in April 1959. This photo, which served as the story’s lead image, “indicates that the Coleman family is pleased with their double answer to transportation problems.”

Coleman spent five years shaping the ’51 Ford into a custom hardtop. He chopped the roof—4 in. off the front pillars, 6 in. off the rear—shaved all the exterior handles, and grafted on rear fenders from a ’53 Oldsmobile 98. Chrome trim was kept to a minimum: He installed a “simple, uncluttered” ’53 Dodge grille up front and a single trim spear down each side of the car. The stock bumpers were reused, with a Kaiser bumper guard added to the rear bumper.

The only work Coleman didn’t do himself was to the coupe’s paint and upholstery.

“Amply pleated interior is finished in gold and white Naugahyde, blending with the lime-gold lacquer finish,” the article explained to readers looking at black-and-white images. This car “was a more costly job than the ’32,” costing Coleman “$1,000 in custom work.”

The Deuce, by comparison, set Coleman back $200 to buy and $600 to modify. The cost of the car was pretty cheap, even in the late ’50s, but that may have been due to its condition.

“The previous owner had channeled the body 10 in. but had allowed rust to penetrate the lower panels,” requiring “extensive body repair” on Coleman’s part. Matador Red lacquer dressed the finished body, and the interior was trimmed in red and white and fitted with a ’40 Ford dashboard. Under the louvered hood was a ’48 Mercury Flathead V8, “mildly modified via Edmunds cam, Evans 8.5:1 heads, enlarged and polished ports and two Stromberg 97 carburetors.”

The feature identified the Colemans as being from the Southern California city of Covina, yet the style of the five-window, with its deeply channeled body, stock roof height and bobbed fenders, looks like it was influenced more by East Coast hot rods than those done in the West, where the unchanneled high-boy was more popular. It does make for an interesting contrast with the radically chopped ’51, though.