Get First-Hand Insight Into the Australian Market

This article focuses on the Australian automotive specialty-equipment market and, more specifically, on the vehicles on the road in Australia that provide the greatest opportunity for U.S. manufacturers. 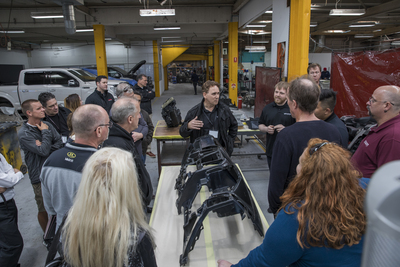 A number of local Australian companies are converting fullsize pickups to right-hand drive. Pictured here, participants on a past SEMA Australia trip visited a Melbourne-based vehicle development company which converts and certifies Ford F-Series trucks for use on Australian roads.

The Australian market was ranked as the second most important export market for U.S. companies in a survey of SEMA-member manufacturers, trailing only Canada. While Australia is roughly the same size geographically as the United States, the population for the entire country—25.7 million—is less than that of Texas. Even so, the following factors have led to an impressive car culture in Australia and great opportunities for U.S. companies:

There are over 18 million registered vehicles in Australia (more than 1 million sold annually, with 1,062,867 sold in 2019), according to the Australian Bureau of Statistics. Australia’s geographic size but relatively small population helps explain the reliance of Australians on their vehicles. Australia has one of the highest vehicle ownerships per capita in the world: 769 vehicles per 1,000 residents in 2019. That figure is steadily rising—up from 746 per 1,000 Australians in 2015.

So What do Australians Drive?

In terms of sheer volume of vehicles on the road, the most important platform for customizing sales is smaller pickups, known as utes (an abbreviation for “utilities”). The Toyota HiLux and Ford Ranger are not only the first- and second-best selling utes in Australia (with the Ranger at times taking first place) but are also the best-selling vehicles overall. Four of the top seven vehicles sold in Australia over the past several years are utes, with the Isuzu D-Max and Mitsubishi Triton in sixth and seventh place, respectively.

The United States and Australia share a common trait in that pickups are used for both work and play, and the heavy prevalence of customization is easy to spot. Utes made up a 20.6% share of the Australian new-vehicle market between January 1 and June 30, 2021, and of the 567,468 new vehicles sold in Australia this year, 101,597 were 4x4 utes and 15,263 were 4x2 utes. Four-wheel drive ute sales performed better than the overall market, growing 34.1% compared to a market recovery growth of 28.3% for the rest of the market from the lows of the early COVID-19 days.

Fullsize pickups also have their consumer base in Australia. Americans will be pleased to know that Australians drive vehicles well known in the United States, such as large pickups that include the Ram 1500, the Silverado and F-Series trucks. Most are converted to right-hand drive in Australia.

The ’20 HSV Silverado 1500 and DS-series Ram 1500 (formerly known as the Dodge Ram) are imported and sold officially in Australia by the vehicle manufacturers, but they are converted in Australia by the Walkinshaw Group. Ram sold almost 2,700 of its 1500-Series trucks in 2019 alone, and it has been reported that the local Ram conversion line at Walkinshaw is working around the clock, five days a week, to keep up with demand.

A number of smaller independent companies that convert other brands of U.S. pickups such as the Ford F-Series and other fullsize pickups also report strong sales. As those vehicles are not officially imported by the vehicle manufacturers, the numbers are not included in the official new-vehicle sales reports to the Federal Chamber of Automotive Industries, which produces those statistics. For those vehicles, the local companies handle the right-hand-drive conversions and certifications to make them Australian street-legal. It is expected that the next-generation F-150 will be built as both left-hand and right-hand drive and will be officially imported into Australia.

Enthusiast favorites such as the Jeep Wrangler and Gladiator can also be readily be found. Those vehicles are sold by the manufacturer as right-hand-drive vehicles straight from the factory and have excited a passionate niche of the Australian market. The JK and JL have captured the hearts of a small but dedicated group of Down-
Under enthusiasts and have generated a strong demand for a wide range of interior, exterior and underhood products to upgrade the beloved vehicles. Managing Director and CEO FCA Australia Kevin Flynn was recently quoted in the media as saying that Chrysler is committed to right-hand-drive vehicles and that there is an effort to grow the number of Jeeps sold in the market to right a recent slide in sales.

Australia is a strong niche market regarding products for U.S. vehicles that include the iconic Ford Mustang. A full 25,854 right-hand drive pony cars have been sold since they went on the market in Australia in 2015. Ford has even teamed up with Australian-based Herrod Performance to produce the fast-selling R-Spec version of the Mustang. Ford has set up a small-scale production line in its Campbellfield facility (in the Melbourne area), staffed by Ford-trained Herrod Performance workers. The Mustang GT manual R-Spec version has an upgraded exhaust, springs, swaybar and supercharger added by Herrod. Following the overwhelming success of the Mustang, musclecar enthusiasts will be treated to the new eighth-generation Corvette Stingray (expected later this year or early 2022), which will be built as a right-hand-drive vehicle out of Chevrolet’s factory in Bowling Green, Kentucky. The right-hand-drive Mustang is also built in the United States.

While this article has focused on new-vehicle sales, SEMA members selling restoration products for classic cars or products for racing will also find extensive opportunities. “My guess is that they have more hot rodders in Australia per capita than we do at home in the United States,” said Classic Industries owner John McLeod, who has traveled to Australia with SEMA.

Said a representative from Comp Performance Group who participated on one of the SEMA Australia trips: “I was impressed with the enthusiasm and passion for high-
performance automobiles and racing that folks have in Australia. I knew the passion was there before heading over, but being there opened my eyes to just how big it is.”

SEMA hosts low-cost overseas trips to top global markets to foster export opportunities for SEMA members. Australia was added to the list of venues in 2016, with 60 companies having since traveled to Melbourne with SEMA to network with pre-vetted overseas buyers and to exhibit at the most important consumer automotive specialty show in the region. The next trip to Australia will be in the spring of 2023. Additional upcoming trips include the SEMA Middle East trip over March 22–29, 2022, with stops in Dubai, United Arab Emirates, and Riyadh, Saudi Arabia; and SEMA Nordic over August 24–28, 2022, to Stockholm, Sweden.