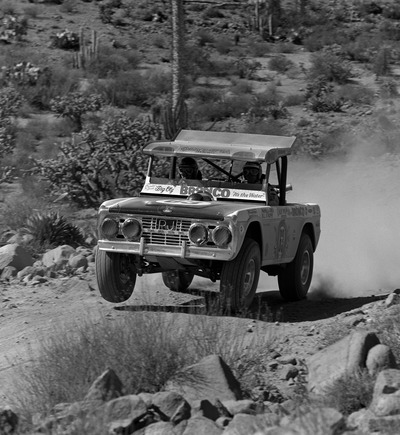 By the end of the ’60s, Parnelli Jones had earned an enviable driving record across multiple forms of motorsports. From Indianapolis to Pikes Peak and midgets to Trans Am, he had won races, set records and earned championships. About the only place his take-no-prisoners driving style didn’t result in trophies was in the desert.

It was Bill Stroppe—Ford’s premier West Coast race-car fabricator—who convinced Jones to try his hand at off-road racing. Stroppe saw huge potential in the Ford Bronco as a desert-race vehicle when it was introduced in 1965. He started developing the Bronco into a racer and entered one at the inaugural NORRA Mexican 1000 race in 1967. Stroppe didn’t finish, as he got stuck in a hole helping another Bronco pilot, Rod Hall, who would go on to win his class and earn his own share of notoriety in racing Broncos.

Legend has it that Stroppe essentially goaded Jones into the desert at a 1967 Christmas party by claiming he wasn’t “man enough” to race off-road. Jones took the bait. The trouble was, even with Stroppe riding shotgun and telling him to take it easy on the machinery, Jones would push Stroppe’s Broncos to the point of failure and a string of desert DNFs.

The solution, in Jones’s mind, was to build an “off-road Funny Car,” as Hot Rod reported in its August 1971 issue, “something that was light, but strong; fast, but controllable—in short, something to match Parnelli’s driving style.”

Instead of the Bronco’s conventional chassis, the race truck was constructed around a chromoly tube frame. The Bronco-style body—a narrowed and sectioned reworking of the stock sheetmetal—was made from fiberglass, while interior body panels were formed out of aluminum. Initially the Bronco was painted red, white and blue, and it wouldn’t get its iconic gold and white livery—and its “Big Oly” nickname—until a sponsorship deal was inked with the Olympia Brewing Company.

The Bronco’s suspension, which used a modified version of Ford’s twin I-beam in front, a four-link locating a 9-in. differential in back, and coil springs and Monroe shocks at all corners, gave Jones 8 in. of wheel travel. Power was provided by “an Isky-cammed 351-C Ford engine,” the magazine reported, “driving through a Ford C4 automatic trans.” For increased durability, the C4 was swapped for a C6 not long after.

The Bronco’s trademark airfoil roof “incorporates two driving lights in the leading edge and a trailing edge that can be angled, via a lever in the cockpit, through 40 degrees in increments of 10 degrees.”

When it was finished, the “Crazy Colt,” as it was first called, had a top speed of 140 mph “and cruises easily at 80,” said Hot Rod. “Parnelli Jones has met his match.”

Well, not quite. Jones managed to break that Bronco, too, at the 1970 Mexican 1000. A year later, though, things were different.

“Everyone knew that if P.J. could keep his tube-framed, fiberglass-bodied ‘Funny Bronco’ together for the 832-mile distance, the race would be his,” Steve Green wrote in Hot Rod’s January 1972 issue. “Jones and navigator Bill Stroppe accomplished just that to win the race in a record 14 hours and 59 minutes (an average speed of nearly 60 miles per hour), although they lost over an hour because of two flats.”

Jones kept Big Oly in his personal stable of race vehicles for decades until he finally parted with it at Dana Mecum’s 2021 Spring Classic auction in Indianapolis. There, Big Oly set one more record with a selling price of $1.87 million.