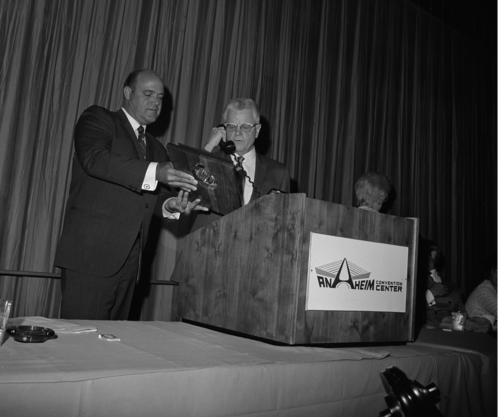 Just three years after its humble beginnings at Dodger Stadium, the SEMA Show in 1970 was making the most of its home in the spacious Anaheim Convention Center. According to a post-Show report in the March 1970 issue of Hot Rod Industry News, more than 7,100 people attended the Show, not including 1,500 VIP guests. The count of exhibitor booths had risen to 481, making the Show the “greatest of all time” in the magazine’s eyes.

Not so great was a logistical issue that took place during the Show’s banquet. Astronaut Charles “Pete” Conrad, commander of NASA’s Apollo 12 mission, had just weeks before become the third man to walk on the moon. To mark that accomplishment, SEMA asked him to be a guest speaker at the Show banquet, where he would be awarded the very first honorary membership in the association.

There was just one problem: At Show time, Conrad was bed-ridden with the flu.

Undaunted, SEMA president Roy Richter (founder of Bell Helmets and Cragar Industries) read the tribute on the award plaque to Conrad over the phone, while Hot Rod publisher Ray Brock held the award for Richter.

SEMA’s choice of Conrad as its first honorary member wasn’t just about his lunar landing. Conrad was a car guy—a Formula Vee racer who was also one of the many astronauts who enjoyed the perk of driving the latest Corvettes, thanks to promotional deals offered to NASA’s finest by GM president Ed Cole and Chevrolet dealer Jim Rathmann. In fact, all three members of the Apollo 12 crew—Conrad, Alan Bean and Dick Gordon—drove matching 427-powered ’69 Corvette coupes that had been customized with a special gold-and-black paint scheme designed by Bean. 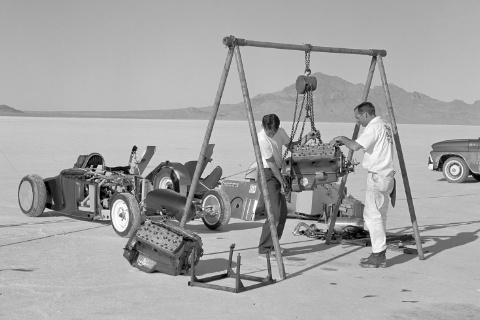