From Indy to Africa to Jill St. John’s Swimming Pool 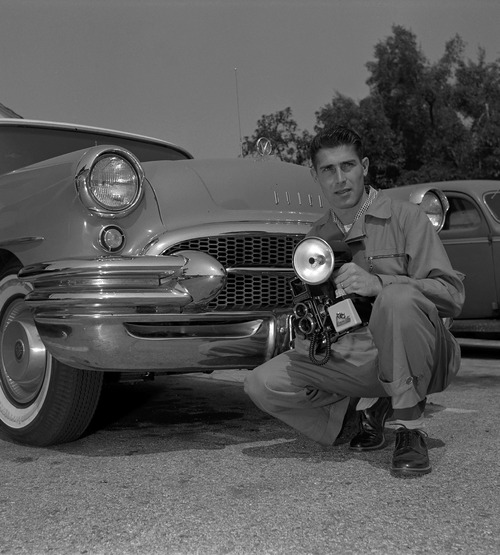 If you are a fan of the historic photos that appear in the SEMA Heritage department of SEMA News, you have Bob D’Olivo to thank—in more ways than one. D’Olivo, who passed away in July at age 94, shot many of those photos during his 40-plus-year career at Petersen Publishing Company.

His name may not be familiar, but his images are iconic and include these gems: Pinstriper Von Dutch sitting cross-legged and playing the flute with a third eye stuck to his forehead; Andy Granatelli planting a big kiss on Mario Andretti in the Indy 500 winner’s circle; or D’Olivo’s boss, Robert E. Petersen, shot from above as he kneels on all 240 copies of Hot Rod in a tribute to the publication’s 20th anniversary. And any number of celebrities, from Johnny “Tarzan” Weissmuller to a teenaged star in the making named Jill St. John, swimming underwater in one of Southern California’s ubiquitous backyard pools. (During those photo shoots, D’Olivo often couldn’t resist turning the camera on himself, so there are several self-portraits of him in a diving mask and scuba gear, his normally well-coifed hair aiming at the water’s surface.)

D’Olivo was versatile largely due to his talents with a camera, but also because he had to be. Petersen Publishing Company got its start covering enthusiast automobiles, but Petersen would later expand his magazine stable to reach other audiences, with titles that included Guns & Ammo, Skin Diver and Teen, so D’Olivo had to be adept enough to photograph cars racing up Pikes Peak, Pat Boone’s family relaxing at their Beverly Hills home, and Bob Petersen on one of his many African safaris.

As head of Petersen’s photographic department, D’Olivo managed a talented staff of shooters, but there was a certain artistry that set his work apart. You can spot a D’Olivo photo taken at Bonneville in the ’50s for the context he put in frame, like dramatic sunrises and cloud formations over the salt. Or how he experimented with composition, often shooting photos at a higher (or lower) angle than expected to give readers a fresh perspective of the scene.

Twenty-first century viewers of his work also should keep in mind that D’Olivo achieved this high level of creativity in the ’50s and into the ’60s without any of the conveniences that a photographer today takes for granted. He shot film, often using a twin-lens Rolleiflex camera (like the one he’s holding here with a Limelite flash gun attached as he kneels in front of a ’55 Buick).

No through-the-lens light metering. No autofocus. Advancing the film was done with a hand crank. No way to preview an image and delete the bad ones. In fact, one is struck, looking at his negatives today, at how few “bad ones” there are in his hundreds (maybe thousands) of photo assignments. Nearly every frame is properly exposed, sharp and thoughtfully composed.

Aside from his creative talents, there’s another reason to think of Bob D’Olivo whenever a vintage Petersen magazine photo sees the light of day: He is largely responsible for creating the Petersen Publishing Company photo archive.

Photographers in the company’s early days kept their own negatives—and sometimes lost them—with little thought to the automotive history they were recording. In 1955, D’Olivo developed a system for logging each exposed roll of film that came through the department, assigning it a number and then storing the negatives, safe in glassine sleeves, in metal cabinets. The cabinets he bought in 1955 are still being used, and they’ve since been joined by dozens more as well as rows of shelves holding file folders of color transparencies to house the millions of images taken by Petersen’s photographers over the years.

After his retirement in 1996 and up until very recently, D’Olivo remained close to the magazines and photo archive that he helped create. He was always glad to visit the archive, review images and provide priceless insight into who and what was on that film. His stories would bring us back to those years more than a half-century ago when a young man and his cameras traveled the world with an eye for capturing adventure, four-wheeled and otherwise.