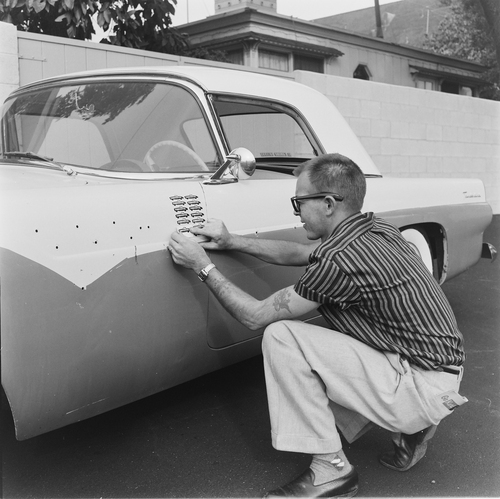 In late 1958, the multi-talented illustrator and cartoonist Pete Millar created just the thing for racers who wanted to record their victories like a fighter pilot. These “easy-to-apply” Drag Decals, advertised in the “What’s New” department of the June 1959 issue of Hot Rod, were available in a choice of 15 different domestic cars “plus a new one for karts.” (A close look at the photo reveals a karting magazine in the back pocket of Millar’s trousers.)

According to Millar’s daughter, Robin, the Thunderbird in the photo was his, though it wouldn’t be for long. He had to sell it in 1959 because of his growing family.

“He had a wife, two daughters under the age of five, another on the way, and a German Shephard,” she said. “There wasn’t enough room for everyone. Something had to go, so the T-Bird went.”

Since Millar was using the T-Bird as a demonstrator, it made sense that its victims were a dozen Corvettes, as the two two-seaters were regularly pitted against each other in magazine shootouts of the day.

Petersen photographer Pat Brollier took this photo and several others in November 1958, though it would be several months before the ad ran in Hot Rod. This picture is an outtake; the ad in the magazine showed a close-up of the decals and Millar’s hands applying one.

This was a pivotal time for Millar. Though he worked as an engineer and a technical illustrator in the mid-’50s, what he really wanted to do was pursue his lifelong love of cartooning. In 1955, his first comic strip was published in Rod & Custom, featuring Arin Cee, an illustrated gearhead mascot for the magazine.

In 1959, he co-created CARtoons magazine with Carl Kohler. Millar would produce it out of his home until the magazine was taken over by Petersen Publishing Company in 1963. That led him to launch his own Millar Publishing Co. and DRAG Cartoons, the first of several drag-race cartoon magazines he would produce.

Millar may be best known for cartoons, but he also expressed his artistic talents as a fine artist, sculptor, illustrator and professional model maker. Millar passed away in 2003, but his work remains visible, thanks to several websites and Robin’s presence with Millar-themed merchandise at the California Hot Rod Reunion and other vintage drag-racing events.