Four in a Row 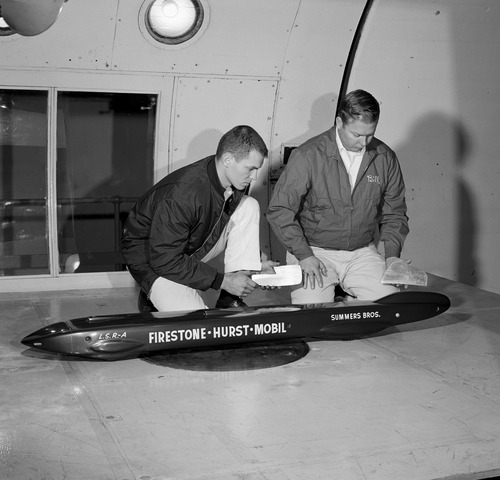 In November 1964, Bob (left) and Bill Summers brought a scale model of their new land-speed-racing streamliner to the Caltech wind tunnel in Pasadena to experiment with the aerodynamics of different tailfin shapes. While sponsors were lettered on the model’s sides, once it was rendered in 1:1 scale, the ‘liner would wear the name Goldenrod.

As modern as it looked, the Goldenrod was something of a throwback. The early ’60s saw the dawn of the jet age in land-speed racing, with pioneers such as Dr. Nathan Ostich, Art Arfons, his brother Walt, and Craig Breedlove hitching jet aircraft engines to a variety of chassis to chase ever-increasing speeds.

Bucking the turbine trend, the Goldenrod had four Chrysler Hemi engines under its sleek aluminum and fiberglass skin to drive its front and rear wheels. Four years before, Mickey Thompson had also used piston-driven power—four supercharged Pontiac engines—to push his Challenger to 406.60 mph, making him the first American to breach the magic 400-mph mark.

Thompson’s accomplishment didn’t set an official record, though, as he wasn’t able to back up that one-way pass. Before he could, the jet jockeys got there first, though not without controversy. Sanctioning rules governing the land-speed records took a while to solidify around the new jet cars, and purists had a hard time accepting what to them were rockets on wheels, their output measured in pounds of thrust rather than horsepower.

The Summers brothers, though, were “undaunted by all the furor and hassle,” wrote Eric Rickman in the March 1965 issue of Hot Rod. Their new car “should settle the entire dispute for a year or so as far as reciprocating engines driving through the wheels is concerned. Bill and Bob are taking the stand that ‘if Mickey went “over four” with a car two engines wide and two engines long, we should be able to go faster with a car only one engine wide and four long.’”

Mounting the four Hemis in a row cut down on the streamliner’s frontal area and helped it achieve a very slippery .117 coefficient of drag. Dyno tests on the injected Hemis showed them making 600 hp on gas “and at least 750 on alky and ‘pop,’” Rickman wrote. “Multiply these ratings by four and the results are some rather impressive power figures.”

Putting that power to the salt was an engineering puzzle that the brothers solved by linking the four engines with a common driveshaft that ran through transfer cases mounted between the two pairs of engines and ahead of fore and aft transmissions. George Hurst and Hurst Performance helped engineer the transmissions’ shift linkage and crafted the Goldenrod’s forged billet wheels, which mounted Firestone tires. Mobil Oil provided the Goldenrod’s fuel and lubricants.

As luck would have it, rainstorms and wet salt hampered the 1965 Bonneville meet, testing hardware and patience alike, but the brothers’ efforts were finally rewarded in mid-November of that year when they clocked a two-way average of 409.277 mph—a wheel-driven record that stood until Al Teague reset it in 1991 at 409.986.

The chase for the piston-driven speed record continues to this day. In 2018, Danny Thompson (Mickey Thompson’s son) resurrected his father’s ancient Challenger 2 streamliner and set the record at 448.757 mph. In 2020, George Poteet’s Speed Demon streamliner, using a Ken Duttweiler-built, 3,156hp, twin-turbocharged, big-block Chevy engine, upped the record to 470.015 mph. It was clocked one-way at over 481 mph. “That’s the fastest a piston-engine, wheel-driven ground vehicle has ever gone in one direction,” wrote Hot Rod’s Marlan Davis, covering the record run. Poteet’s new record, Davis said, was “closing the gap on turbine-powered cars.”