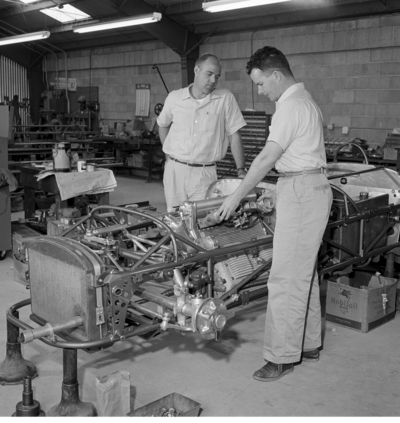 “Don’t take your eyes off Vukovich.”

That was the advice of Hot Rod’s Ray Brock, doing his annual Indy 500 preview for the magazine’s June 1955 issue. In the ’50s, Hot Rod’s coverage of the 500 included pre-race visits to shops around the Southern California area to ferret out the latest news about what to expect at the Brickyard. Those were the years when Indy roadsters had a lot in common with the era’s hot rods and were often constructed by top-tier hot-rod builders, whose shops were within an easy drive of the magazine’s Hollywood office.

It looked like the 1955 race was going to be groundbreaking, with several innovative entries under construction. For example, Frank Kurtis was building a streamlined car with a bubble canopy for Jimmy Daywalt to drive. Another Kurtis roadster, a D-500 sponsored by Bardahl, was being sent to Italy to be fitted with a Ferrari engine. Car builder Quinn Epperly was also experimenting with streamlining a Kurtis roadster for sponsor Belond and driver Jim Rathmann.

Yet Brock, seen here at left watching Stu Hilborn fit a fuel-injection system to the Offenhauser in Bill Vukovich’s roadster, told readers they should not count out the two-time 500 winner, who was gunning for his third consecutive victory.

As it turned out, the 1955 Indy 500 was more news-making than groundbreaking. Daywalt’s streamliner could only qualify for the race after the removal of its swoopy fenders, becoming “just another Kurtis roadster,” Brock wrote in his race coverage. Daywalt finished ninth.

Likewise, the Belond streamliner was stripped down to a more conventional shape before Rathmann drove to a 14th-place finish. The Bardahl-Ferrari never made the grid.

“Around the Indy garage area, some people thought that the Ferrari factory was more interested in looking over the Kurtis chassis than they were in entering a car in the 1955 race,” Brock said.

It was Vukovich who made headlines, but for an unfortunate reason, fatally crashing in the 56th lap after leading most of the race. In his story, Brock paid tribute to “the most aggressive driver of modern times. To a lot of nonpartisan observers like ourselves waiting in the garage area for reports on Vukie’s condition, the race lost all of its luster after that all-final announcement was made.”