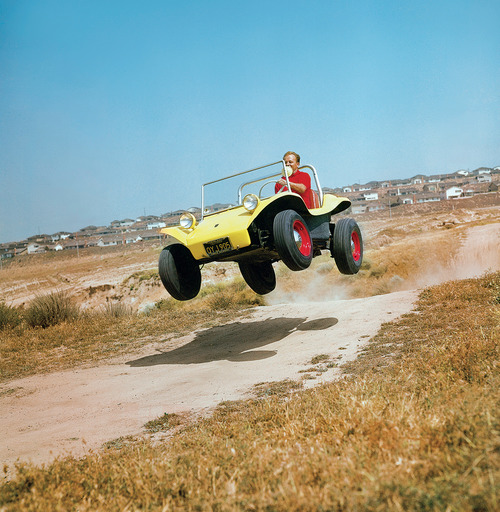 As this issue was going to press, we learned that Bruce Meyers, inventor of the Meyers Manx that spawned the dune buggy craze and countless imitators, passed away at the age of 94. This article was originally written in late 2020, after Meyers and his wife Winnie announced the sale of his iconic dune buggy manufacturing company, Meyers Manx Inc., to an investment firm that would “maintain the old and introduce the new,” as Meyers described it. The CEO and chief creative officer of the new Meyers Manx LLC is Freeman Thomas, an automotive designer whose previous work on concept and production cars included the Volkswagen New Beetle and Audi TT, plus several Daimler Chrysler concept vehicles.

“As a California native, I grew up on the beaches of Southern California surrounded by its unique and creative lifestyle culture,” Thomas said in a statement about the new venture. “As I became an automotive designer, the philosophy of Bruce Meyers became a huge inspiration, and I am sure I am not alone in thanking him for injecting a huge dose of disruptive creativity into the automotive scene.”

Thomas called the original Meyers Manx a “wildly successful, whimsical, fun and capable machine” that “launched a pop culture movement that helped define the ’60s, a time of love, rebellion and free thinking. The Meyers Manx was not simply a dune buggy; it was a vessel of freedom, and it continues to be.”

It was in 1966 that Meyers’ “vessel of freedom,” with Meyers himself at the wheel, flew off the cover of Hot Rod’s August issue to herald the “New Craze” of “Off the Road Fun Cars.” Editor Bob Greene’s accompanying cover story, “Terra Firma Funny Cars,” provided a roundup of the era’s “off-the-road specialty vehicles,” which ranged from V8-powered Jeeps to “cut-down Detroit sedans” and “salvaged and denuded Volkswagens with a rollbar in place of a body.”

One page of the story was devoted to photos and captions of Meyers’ “go-anywhere machine.” For a photo showing the Manx at speed, Greene wrote, “Being super light, the Manx can compete favorably with both dune buggies and Jeeps. The car is ultra-smooth and maneuverable.”

A shot of the Volkswagen pan that formed the Manx’s foundation described how the wheelbase of the ex-Beetle “is shortened to 80 in. by chopping 141/2 in. out of belly pan.” Then owners could add “your engine of choice” from a VW, Porsche or Corvair.

The exploits of the early Meyers Manx are legendary. The very first Mexican 1,000 race down the Baja peninsula in 1967 was won by a Manx piloted by Vic Wilson and Ted Mangels. Meyers’ original Manx prototype, which he built in 1963–1964 and dubbed Old Red, not only still exists but also has been inducted into the National Historic Vehicle Register.

The Manx was one of several models, including the Tow’d and the Manx Street Roadster, produced by B.F. Meyers & Co. in the mid to late ’60s. Some 7,000 kits were made in the company’s heyday before Meyers left in 1970 after unsuccessful legal battles with manufacturers making imitations of his buggy kit. The company closed in 1971, but Meyers reincorporated again in 1999 as Meyers Manx Inc. and has been producing dune buggy kits ever since.

The announcement of the new Meyers Manx LLC did not include any specifics about upcoming models, but Phillip Sarofim, chairman of the new venture, said that the company is “putting together an international dream team of passionate and creative souls to carry on the Meyers Manx legacy of fun, freedom and expression that Bruce and Winnie created. We are humbled and honored to continue the Meyers Manx legacy!”