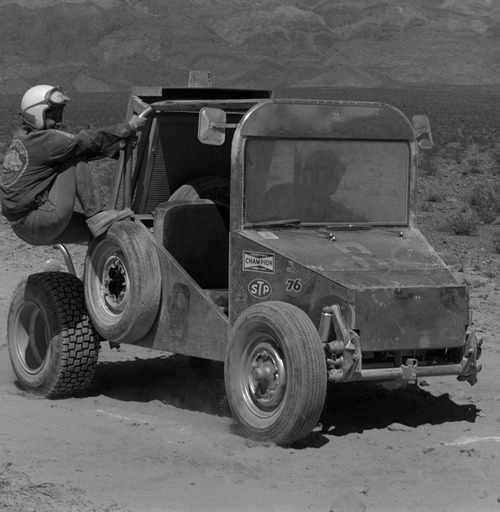 The Mint 400 has earned a longstanding reputation as being one of the roughest off-road races in the country, as this photo from 1969 attests. John Thawley, reporting on the race for the June 1969 issue of Hot Rod, said 206 entries started the two-day event, but just 21 finished the required eight laps of the course—“46 miles of dust, rock, and talcum powder along Nevada desert roads laced with holes, ditches, hills, and a wide and ugly assortment of equipment-breaking surprises.”

Breakage was especially common among the buggies in the race, he wrote. “At least 13 cars were put out of action by broken VW spindles.” The “snapping like matches” line used for this story’s title came from Thawley’s caption for this photo, describing the havoc the Mint course wreaked on the VW front ends. “A little weight transfer aids in getting the tricycle home,”
he added.

A motorcycle won the race overall, though the two-wheeled entries suffered from the conditions, too. Famed racer (and the previous year’s winner) J.N. Roberts dropped out due to talc-like silt fouling the ignition on his Husqvarna. The same happened to the Bultaco ridden by Larry Berquist and Gary Preston. First overall was claimed by Mike Patrick and Phil Bowers, who rode a Yamaha 250 to victory in a little over 10 hours. The first four-wheeled vehicle to finish, John and Linda Johnson’s Corvair-powered buggy, came in more than four hours behind them.

“With Bobby at the wheel and Al riding shotgun, the Bronco took a tumble the first day’s running,” Thawley wrote. “On the second day of the race, Bobby flew back to Indy for some tire testing, and Al rode with Parnelli Jones. You guessed it: Jones tumbled the Bronco. Al just has to have a few choice words on the subject of off-road racing.”