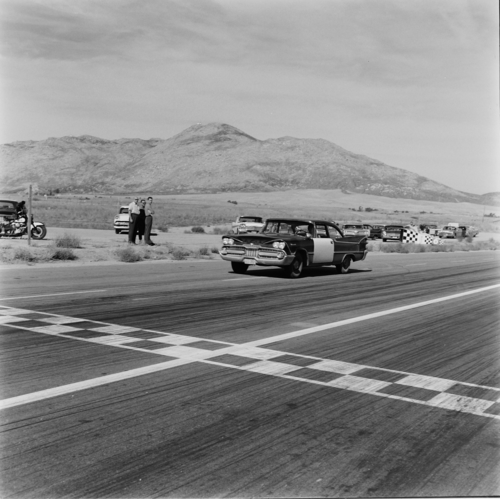 When the California Highway Patrol (CHP) needed to replenish its fleet of patrol cars in late 1958, it asked car manufacturers to submit sample versions of their ’59 models for evaluation. At the time, the CHP had some pretty specific requirements: The car had to be a two-door sedan with a minimum wheelbase of 122 in. and weigh at least 3,800 lbs.; be equipped with heavy-duty suspension, heavy-duty brakes, 15-in. wheels, six-ply nylon tires, and an automatic transmission with at least three forward speeds; and be powered by an OHV V8 of at least 380 ci with at least 9.75:1 compression, hydraulic lifters, a single carburetor (though multiple carburetors were allowed) and dual exhaust.

Those prerequisites ruled out some of the most popular cars of the time, including models from Ford, Chevrolet and Plymouth. Of those makes that did qualify, just three—Dodge, Mercury and Pontiac—submitted cars for the CHP to test in November 1958.

Hot Rod Technical Editor Ray Brock tagged along with the CHP officers tasked with evaluating the potential cruisers, and he described them in the magazine’s February 1959 story, “How Hot are the Police Specials?”

The Dodge Coronet “was the lightest of the three, weighing just 4,060 lbs.” It was powered by a 383ci, 345hp D-500 V8, and its TorqueFlite transmission sent power to a 3.36-geared axle. The Mercury Monterey was the heaviest at 4,560 lbs. “but also had the largest engine, a 430-incher rated at 345 hp.” Its Merc-O-Matic transmission was paired with a 3.22 axle ratio. The Pontiac, weighing 4,390 lbs., “used a Tempest 420-A engine with 389ci and rated at 330 hp” and a “dual-range Hydra-Matic” to send power to the 3.08 rearend. The Dodge and Merc rolled on Goodyear Bluestreak tires, while the Pontiac was fitted with Firestone Super Sports.

The four-day test began with a drive from the state capitol in Sacramento up to Lake Tahoe and then to the small town of Bridgeport on the eastern edge of the state—a route that subjected the cars to the “all types of roads imaginable” that can be found in California, “from freeways to twisting mountain roads to city streets to rutted dirt roads and sometimes across wild stretches where there are no roads,” Brock wrote.

Day Two found the fleet doing acceleration tests on an Air Force runway in Palmdale, where each car had to run at least 110 mph. The cars “qualified easily,” Brock said, with the Dodge hitting a top speed of 122.023, the Mercury 121.84, and the Pontiac 117.34 mph. More acceleration tests were done on the third day, this time at Riverside Raceway. In the standing-start quarter-mile, the Dodge was fastest at 86.89 mph, followed by the Mercury at 83.15 and the Pontiac at 81.98. The Dodge was also fastest in the standing-start mile, running 117.67 to the Pontiac’s 115.28 and the Mercury’s 112.96.

The test drivers, all veteran officers from CHP headquarters, also used Riverside to test the cars’ handling. “A couple of the test drivers had former racing experience,” Brock noted, “so they showed no mercy as they whipped the cars through their paces.” At the end of the day, the drivers “judged the cars to be of equal ability in handling and roadability.”

The final day was devoted to testing the cars’ brakes, “since high speed chases are quite frequent and the drivers must often use the brakes severely,” Brock said. The brake systems were evaluated for fade over repeated panic stops, and the cars were also judged to see how much they deviated from a straight line while under heavy braking. Here, the Mercury fared best, followed by the Dodge and the Pontiac. “All were judged to have acceptable braking ability for patrol cars,” Brock said.

Since all three cars were “judged acceptable in all phases of the tests,” in the end, the CHP’s choice came down to money. “A Dodge dealer had the lowest price so received the contract,” Brock wrote, without mentioning what that price was (darn it). This initial purchase would be for 331 cars—about half the number the CHP expected to buy in 1959.

“A lot of prestige goes along with the contract for the cars,” Brock said, “since the CHP consistently wins the fleet safety award given by the International Association of the Police Chiefs each year. We predict the bidding will be furious for the second group of ’59 cars because of the obvious advertising value of being selected by such a particular
organization.”