For most people, the thought of winning the lottery and never having to work again go hand in hand. While a very small percentage of people win the lottery, that life-changing experience served as a catalyst for Gil Cisneros to start a foundation dedicated to providing educational opportunities for children in underserved communities and run for political office. In 2018, he was elected to represent California’s 39th Congressional District, which includes SEMA headquarters in Diamond Bar, California, in the U.S. House of Representatives. SEMA has developed a close working relationship with Rep. Cisneros during his first year in Congress, which included a visit to the SEMA Garage.

The SEMA Garage provides association members with access to the special high-tech tools and equipment they need to get their products off the drawing board and into customer hands. Spanning more than 15,000 sq. ft., the SEMA Garage is filled with nearly $2 million worth of equipment, including two vehicle lifts, a portable coordinate measuring machine for 3-D scanning, a 3-D printer for fast prototyping, digital race car scales for the most precise vehicle weight measurements, a dynamometer for power output measurements, and more. It also features an emissions lab that makes it easier and more affordable for SEMA-member companies to ensure that their products comply with emissions requirements. The SEMA Garage is the only known facility of its kind to offer such a wide range of interconnecting services.

“It was a pleasure to host Rep. Cisneros at SEMA’s headquarters and provide our hometown Congressman with a tour of the SEMA Garage,” said Chris Kersting, SEMA’s president and CEO. “We enjoyed hearing about the congressman’s efforts to advance policies in Washington, D.C., that help manufacturers. The visit was also an opportunity to help Rep. Cisneros understand that SEMA members don’t just market exciting products; they are an economic driver in communities across the country.”

California’s 39th Congressional District includes parts of Los Angeles, Orange and San Bernardino Counties. While SEMA has more than 7,500 member companies around the world, more than 1,500 members are based in California, with a particularly dense concentration in the southern part of the state. With SEMA’s headquarters and more than 75 member companies located in his district, Rep. Cisneros represents the heart of car country.

Rep. Cisneros enlisted in the Navy after graduating from high school and went on to serve for 10 years, reaching the rank of lieutenant commander. He served in the Persian Gulf during Operation Desert Shield and comes from a long line of veterans, as his father and grandfathers served in the military. Rep. Cisneros attended George Washington University on a Naval Reserve Officer Training Corps scholarship, graduating with a bachelor’s degree in political science. He also holds an MBA from Regis University and a master’s in urban education policy from Brown University.

Congressman Cisneros worked as a shipping and production manager for Frito-Lay before having the good fortune of winning the California Lottery. He and his wife started the Gilbert and Jacki Cisneros Foundation in 2011 with an initial investment of $20 million.

Rep. Cisneros has distinguished himself during his first year in Congress on military issues and national security policy; he is a member of the House Committees on Armed Services and Veterans Affairs. Rep. Cisneros has also shown his support for the automotive aftermarket, as he is a member of both the Congressional Automotive Performance and Motorsports Caucus and the House Manufacturing Caucus.

Rep. Cisneros is an avid runner and enjoys spending time with his wife and twin boys, including attending their soccer games on weekends. Cisneros is also a proud fan of the Los Angeles Dodgers and Chargers.

“Growing up, my dad and I bonded over our love of cars, and I have many fond memories working on his old ’56 Chevy,” Rep. Cisneros said. “Although I was a proud Corvette owner, I’ve since been forced to trade it in for a minivan following the birth of my twin boys. While I no longer have a Corvette, the 39th District is lucky to have SEMA as a local community resource for current and future car enthusiasts. As a former small-business owner, I’m committed to being a partner with small businesses nationwide to ensure that Congress does all it can to encourage the entrepreneurial spirit.” 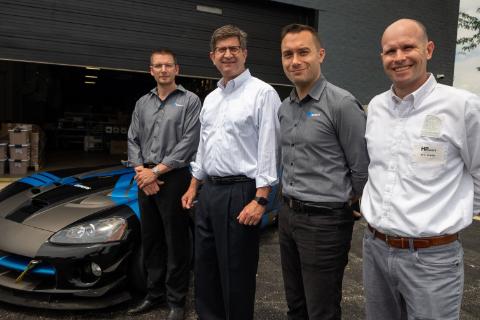