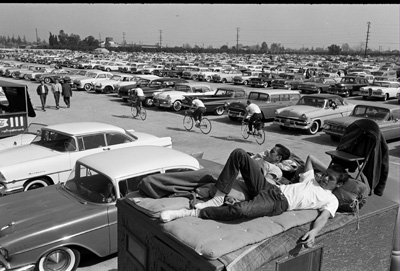 Given the lengthy schedule of events put on by the NHRA today, it’s hard to imagine a time when the drag-racing sanctioning body had just one national event on its calendar: The National Championships—or “The Big Go,” as Hot Rod magazine liked to call it. So when a second national meet was added in 1961, it was a very big deal.

That explains why some 40,000 spectators turned out at the Los Angeles County Fairgrounds in Pomona to watch the very first Winternationals—the “Big Go West”—held over a three-day weekend in February.

At that time, the dragstrip served double-duty as the straightaway for a road course, both of which were laid out within the Fairgrounds’ huge parking lot. In fact, not much separated the event’s spectators from the drag action—just a few rows of empty parking spaces and a line of hay bales. So when Petersen Publishing’s Ralph Poole turned his camera away from the strip to capture the full-to-overflowing parking lot, he caught these two young guys soaking in the racing atmosphere from the roof of their rustic camper in what was likely a front-row seat.

Jack Chrisman won the inaugural Winternationals Top Eliminator trophy, driving the twin-engine Howard Cam Special in the final against an up-and-comer so unknown to the magazine’s staffers that they misspelled his last name as “McKewen.” Tom McEwen, of course, would go on to fame as “The Mongoose,” match-racing Don “The Snake” Prudhomme for years.