TORA Gives Back and Honors Contributions

The Truck and Off-Road Alliance (TORA) hosted its annual award ceremony at the 2015 SEMA Show in Las Vegas. The event offered current and prospective TORA members with networking opportunities and honored outstanding members of the light-truck industry. Two awards were presented: TORA Hall of Fame and TORA Retailer of the Year.

Attendees at the event had the opportunity to support SEMA Cares by renting a pinewood car and racing for the title of Fall Nationals Top Eliminator. The champion at the 2015 SEMA Show was Chris Kersting, SEMA’s president and CEO, and the runner-up was Rob Kelley from Truck’n America. The pinewood races raised nearly $2,200 for SEMA Cares.

The TORA Retailer of the Year award was established to honor an outstanding light-truck accessory retailer whose creativity, dignity, integrity, industriousness, professionalism and accomplishments have enhanced the stature and annual growth of the industry within the candidate’s community. The 2015 Retailer of the Year award went to Cap World Inc.

Cap World Inc. currently operates 12 retail stores located in Massachusetts, New Hampshire, Maryland and Florida. It is a full-service company, which means that all of its stores provide sales, customer service and expert installation. Its mission is to lead the truck-accessory industry with state-of-the-art products and a deep commitment to the company’s employees, customers and the communities in which it does business.

The TORA Hall of Fame honors outstanding individuals in the light-truck accessory industry whose creativity, dignity, integrity, industriousness and accomplishments have enhanced the industry’s stature and significantly contributed to its growth on a national and international basis. This year, the TORA inducted Charles Morrison Jr. into its hall of fame.

From 1976 to 1998, Charles Morrison Jr., along with his son, Charles Morrison III, operated Cap City USA, which began selling truck caps out of an old Crab Shack in Southern Maryland. Cap City grew into a multi-store retail chain that reached from New York to Florida. It manufactured its own aluminum and fiberglass truck caps from 1985 to 1998.

In 1989, Morrison Jr. took six months off to start the Truck Cap Industry Alliance (TCIA, now the TORA) and personally hired an association director to get the fledgling council off the ground. He organized the first TCIA meeting in 1989 in Omaha, Nebraska, where Dillard Fletcher was nominated and then elected the first TCIA president. In August of that year, Morrison and other TCIA committee members met in Chicago to finalize plans for TCIA’s future and to establish the first TCIA trade show. He served as the first TCIA show chairman when the event was held February 25–27, 1990, in Orlando, Florida. Nancy, his youngest daughter, dressed in a TCIA turtle costume and strolled the convention center floor.

Charles Morrison Jr. is a decorated veteran and officer. At almost 84 years of age, he had not missed a SEMA Show up until a few years ago.

The annual new product awards are chosen by a panel of volunteer, non-manufacturing industry professionals within TORA. The awards recognize innovation, product potential and consumer appeal in two categories: best under $500 and best over $500. The council awarded J.W Speaker Corporation with Best New Product Under $500 for their 8900 Evolution LED Headlight and Rigid Industries with Best New Product Over $500 for their Midnight Edition LED.

The TORA booth at the 2015 SEMA Show was centrally located in the South Hall of the Las Vegas Convention Center. Show attendees stopped by to learn about the council and its initiatives, meet the organization’s leadership and discuss volunteer opportunities. The booth became a destination point for networking and meetings, providing benches and a welcoming environment in which to sit and relax. Vehicles from Westin Automotive, Truck Accessories Group, Bolt Locks by Strattec and A.R.E. Accessories were featured outside and in the booth. Together, those companies donated more than $5,000 to SEMA Cares this year.

TORA and the Off Road Business Association hosted a happy hour in the TORA booth to cap off the opening day of the SEMA Show. The booth proved to be a perfect setting to evoke discussions about the latest trends in the light-truck accessory industry. 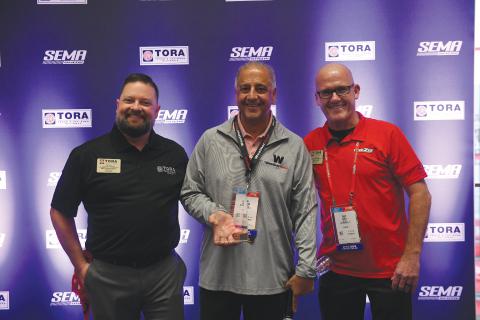 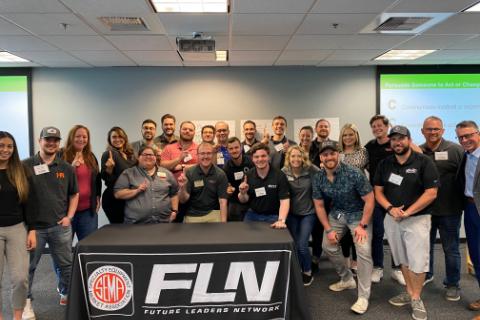