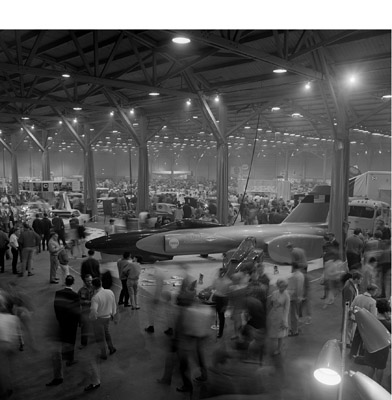 In January 1965, Petersen Publishing photographer Pat Brollier set up his camera to get as much depth of field as possible to capture the goings-on at the Winternationals Custom Auto Fair in the cavernous Pan Pacific Auditorium in Los Angeles. That small aperture resulted in a long exposure, blurring many of the visitors as they passed by what had to be one of the most dramatic exhibits in the show.

The silhouette of Craig Breedlove’s Spirit of America is unmistakable, and seeing it inside the hall gives an idea of just how big the land-speed racer was. Spirit was on display along with Breedlove’s Spirit II dragster and Spirit’s Bonneville support truck.

Just a few months before, in October 1964, Breedlove became the first to break the 500-mph mark and drove Spirit to a new land-speed record of more than 526 mph. It was while setting that record, though, that one of Spirit’s parachutes broke loose, sending the rocket car on a wild, 5-mile ride across the salt flats that ended with the racer nose-down in a brine pond.

A picture similar to this one was the lead photo in Car Craft magazine’s coverage of the Winternationals show in its May 1965 issue.

It was a banner year for the event; not only did Breedlove show his land-speed racing cars, but Steve Scott also debuted his now iconic Uncertain T, “a new concept in street rods,” said the magazine. Actor/racer Norm Grabowski brought his Corvair-powered Six Pack motorcycle; Carl Caspar’s wild Caspar’s Ghost came all the way from Michigan and won the Grand Sweepstakes award for Best Rod; and Tony Nancy won the Grand Sweepstakes award for Best Competition car with his futuristic Wedge dragster, “one of the few that have the driver in front of the mill,” said the story.