Hot Rod magazine’s LeRoi Smith took this photo in the spring of 1963 outside of Barr’s Muffler Shop in Studio City, California, for an article on building a cost-effective exhaust system for an Olds-powered hot-rod roadster. That’s Bobby Barr in the foreground talking to Jerry Eames by the tube bender. This photo is an outtake from the shoot; in the photo that appeared in the magazine, Barr and Eames are far more intent on their work.

According to Smith, the whole exhaust system—the open headers plus cut-outs to glasspack-filled pipes running under the car—cost just $150.

“Here’s what you need to build the wildest set of outside headers (lakes pipes) in town,” he wrote. “Curved tubing is available at speed shops; header flanges, short adapters are from C-T Automotive. Flared tubes were rolled by local sheetmetal shop from 18-gauge steel.”

Piece of cake and a template that can still be followed today by hot-rod builders. For this particular car, the finished exhaust system was removed, ground smooth and taken to a nearby chrome plater for finishing, “which usually adds another $50 to $75 to total cost,” Smith wrote. Okay, that part has changed over the years.

The roadster, a ’29 Model A on Deuce rails, may look familiar to longtime car-magazine readers. It belonged to Sam Conrad, who was one of the original members of the L.A. Roadsters car club. When Conrad bought the car as a teenager, it was powered by a Flathead. He made quite a few changes to the car over the years as it morphed into the state seen here. Fellow club members Smith, Dick Scritchfield, Neal East and Steve Kelly helped Conrad build the car. With friends like those, it’s no wonder the car got a fair share of ink.

Smith wrote several tech articles featuring Conrad’s roadster for Hot Rod in 1963. The car also appeared twice in Popular Hot Rodding in articles written by Scritchfield and Smith. By then, Conrad’s car was a potent machine, its Olds mill sending 550 hp to the rear wheels. The hot rod was capable of running 11.60 seconds at 124 mph in the quarter-mile and returning 15-mpg fuel economy on long-distance cruises. This exhaust system, in its final chrome-plated form and contrasting with the roadster’s midnight-blue paint, makes Conrad’s roadster easy to spot in those magazine stories and more from the era. 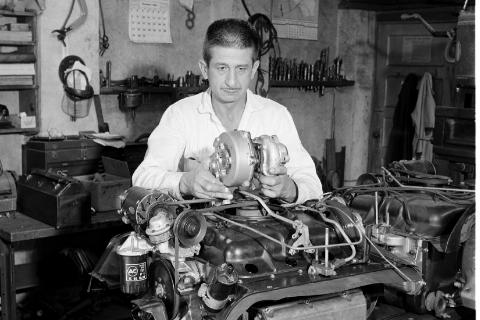