By Drew Hardin
Photo Courtesy of the Petersen Archives

Shelby American had a presence at the High Performance and Custom Equipment Trade Show at Dodger Stadium in 1967, the event that would go on to become the SEMA Show. It’s interesting to see what’s in the Shelby booth—as well as what’s not. Shelby’s iconic Cobra roadster and the GT350 Mustang are represented only by photos on the booth’s back wall. Note, too, the “wanted” poster on the easel soliciting for manufacturer’s representatives to handle Shelby’s parts and equipment.

The engine in the center of the booth is a small-block Ford outfitted with a Paxton supercharger. Shelby began offering the blower on ’66 GT350 models, though the expensive option found few takers. Only 11 GT350s left the factory as supercharged models. Many more of the Paxton kits were sold over the counter to Shelby Mustang owners who were looking for extra grunt from their 289ci V8s. Speaking of which, the back wall of the booth also displays single- and dual-carb intake manifolds, a carburetor, a piston, a camshaft, lifters and other speed equipment offered by Shelby.

Dominating the floor space in the booth is a GT40. Though not technically a Shelby product, the GT40 became the Ferrari fighter that Henry Ford II wanted it to be only after Carroll and his engineers successfully upgraded the race car. Six months prior to the trade show, GT40s famously went 1-2-3 at the 1966 24 Hours of LeMans, with the top two spots taken by Shelby-backed cars.

The GT40 in the booth was not one of those winners, though. Those cars were Mk II models with 427ci engines. This one was a Mk I with a 400hp 289. According to the card alongside the car, this particular “prototype racing car” was “entered in competition at Daytona Continental, Sebring, LeMans, Nürburgring. Price: $18,250.”

That was a lot of money in 1967 dollars. Consider that Shelby’s ’67 GT350 and GT500 had starting prices of around $4,200 to $4,400. So did the Corvette. A 427 Cobra—considered stratospherically priced for the everyday enthusiast—was nearly double that. The all-new Camaro, by contrast, started at less than $3,000.

And yet, fast forward nearly five decades. A documented GT40 Mk 1 prototype, believed to be the first GT modified by Shelby, sold at Dana Mecum’s Houston auction in April for $7 million. Given that yardstick, the $18,200 Shelby was asking for this car was a real bargain. 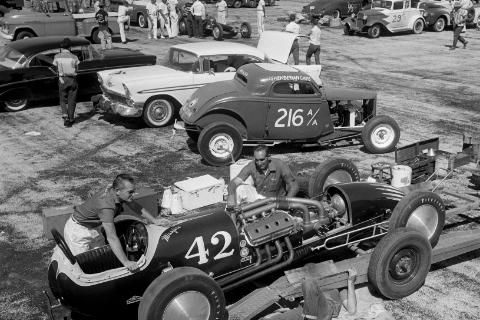