Ensuring the Top Return on Your Trade Show Investment Before, During and After

This series of SEMA News stories is based on the idea of using reliable and repeatable methods to ensure business success. In coming issues, we will delve into a range of topics aimed at developing Best Practices through knowledge, motivation and skills.

Trade show participation can be one of the most effective ways to introduce new customers to your products or services as well as to update current clients about innovations. A trade show provides an opportunity for face-to-face consultations and hands-on demonstrations, delivering everything up to and including order agreements. Yet somewhere between 75% and 85% of the leads developed at trade shows are never followed up after the show. That’s a staggering waste of a significant investment.

But even the term “follow up” is a bit of a misnomer. The cultivation of business from a trade show should actually begin well in advance of opening day. The best practice is to establish a plan for how to handle contacts in the days and weeks leading up to a show, including development of an e-mail or regular mail message that can be tailored specifically to the interests of prospective customers. Doing that prep work ahead of time helps ensure that your company will pursue the leads that occur on the show floor.

In the case of the SEMA Show, there are even more tools available to exhibitors who wish to prepare for, procure and profit from trade show leads. The SEMA Show uses CompuSystems, a computerized lead-retrieval provider that not only supplies full contact data for buyers and exhibitors who use the system, but also allows exhibitors to buy advance lists of retailers and jobbers who will be attending the week-long event in Las Vegas. Jenny Clifford, marketing manager for Rhino Linings Corp., said that her company takes full advantage of that service as it prepares for the annual event.

“Prior to the SEMA Show, we purchase the leads available through CompuSystems based on the various automotive markets we target,” Clifford said. “We also pull up any prospects that have contacted us within the last year and do a pre-SEMA postcard mailing. We make sure the postcard is relevant to the automotive market the prospect is in. One type of postcard is not usually best for all.”

John Fischer, vice president of sales and marketing for AfterSoft Network NA Inc., said that his company pursues a similar pre-show strategy. “Each show differs,” he said, “but we mail out postcards to our target market for SEMA announcing our attendance and specials and inviting buyers to our booth. We also send a similar e-mail blast to all e-mail addresses that we have within our target market, and we call approximately 1,000 prospects.”

The CompuSystems service can make things really simple for exhibitors at the SEMA Show, and about 87% of them used the system last year, according to Susan Schwartz, CEM, president of ConvExx, the SEMA Show management company.

“All attendees have barcodes on their badges at the SEMA Show,” Schwartz explained. “Any exhibitor who has rented a CompuSystems reader then has the ability to have an attendee swipe their code through the machine. It reads the code and stores the contact’s name, address, e-mail address and phone number as well as some information about how much they buy, whether they have status as ‘recommend to buy’ or if they are the actual buyer, how many stores they have and so on.”

The exhibitor receives a USB thumb drive that contains all of the leads captured from the reader. The information is available immediately, which allows the exhibitor to retrieve the data whenever it’s desired.

“The exhibitor can even take the thumb drive back to the hotel every night and download the information to the home office,” Schwartz said. “The office staff can then get started on the day’s leads even before the SEMA Show is over, so an attendee can have information from that exhibitor sitting at his desk when he gets back from the Show.”

What’s more, CompuSystems can automatically feed the information into an exhibitor’s home office database. And since the data is CSV (comma-separated values) compatible, it easily downloads into Excel spreadsheets or other sales software.

The system also serves up data in the other direction. The SEMA Show uses CompuSystems to send every buyer a listing of all the booths where his or her code was swiped during the Show. On the exhibitor side, a comprehensive post-Show download is sent to the exhibiting company containing not only contact information for the booth swipes, but also information about anyone who downloaded exhibit information from the company’s entries in the New Products Showcase—including media. If an editor from Hot Rod or CarDomain.com took an interest in a new product, the exhibitor gets that information and can follow up on it.

Whether you’re using the CompuSystems method or simply collecting contact information from business cards, ensure that you and your sales team make notes about every potential customer who visits your booth as the show progresses. Jot down what specific products the person was interested in and any deadlines you discussed. Also categorize the prospect’s intent to buy in your notes; “hot,” “warm” and “just looking” are broad terms to use. The top category should be reserved for visitors who have buying authority and show real interest—but follow up with all of them. An attendee who visited the booth just to enter a contest or pick up some literature could turn “hot” by the time you return to the home office.

Post-event follow-up is crucial to creating the greatest return on a trade show investment. The best practice is to act either during the show, as noted above, or within days of returning to the office. Give responsibility for each lead to a specific salesperson with detailed instructions about how to proceed. Delays increase the chance that a buyer will accept a different offer. There are strategies that can simplify the salesperson’s tasks.

If you’ve already developed the essentials of a personalized cover letter, the salesperson can simply fill in information that is customized according to the notes made during the attendee’s visit to the booth. Include any requested literature in the package, promise a later phone call—then be sure to follow through! Phone calls obviously take the most time, but they’re also the most effective, allowing the salesperson to review the prospect’s product interests and answer spontaneous but important questions. This call also allows the salesman to discuss a future meeting, offer fact sheets or product brochures or provide information about special offers.

“Whether or not the lead came by the booth is irrelevant,” said Clifford. “We always make sure that we ‘touch’ the prospect at least two more times after the SEMA Show. The marketing team develops postcards that are mailed to each lead, making sure that the postcard is different with each mailing. This is just a gentle reminder and keeps your company name fresh in the prospects’ minds.”

A week or two after the show, when the flurry of follow-ups has subsided, sit down with your sales staff and other personnel who attended the event for a post-show analysis meeting. Talk about the booth size and layout, its location, the traffic patterns around it. Discuss what worked well and what needs further discussion and refinement. Review the literature and displays that were furnished in the booth and use these discussions to plan for
future shows.

A month or two down the line, evaluate the new business that resulted from the show. Your return on investment can be measured by the simple subtraction of how much you spent to be there from how much revenue you generated as a result. However, don’t ignore the intangibles that may also have accrued, such as building brand awareness and planting the seeds for future business that may take a bit longer to bear fruit.

“We have received phone calls from leads or prospects up to 1½ to 2 years after speaking to them the first time,” Clifford said. “We keep them in the loop with changes to our packages or pricing with e-mail blasts sent a couple times a year. We also send leads any relevant press releases, such as new products we’ve added.”

But if you don’t follow up, you’ve wasted an enormous percentage of the money you spent going to a show. “One exhibitor told me that he had an incredible number of leads when he left the SEMA Show in 2009,” Schwartz recalled, “but he had a bad salesperson who didn’t follow up on a single one of them. That not only costs money but frustrates buyers who think that they’ve given their information in good faith.”

On the other hand, she said, it’s never too late. The CompuSystems program used at the SEMA Show can continue to provide a company’s lead information at any time—even months afterward.

“You never know what the buying cycle might be,” Schwartz said. “A prospect might not even be ready to buy until mid-year, so you might catch him or her at exactly the right time.” 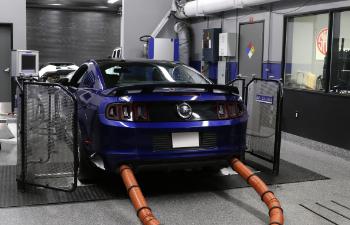 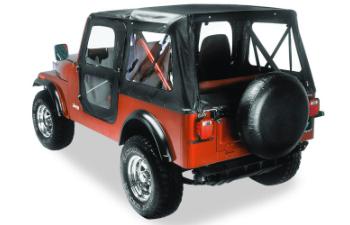 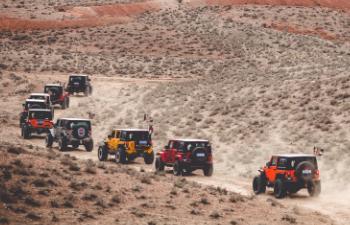