Edmunds has named the Ford F-150 as its Top Rated Truck for the third consecutive year and the F-150 Lightning as its Top Rated Electric Truck for 2023. Edmunds’ test team recognized Ford’s generations of internal-combustion engine vehicle innovation on F-150. The experts celebrated the vehicle’s trucking abilities and usability for consumers.

Edmunds Editor-in-Chief Alistair Weaver said: “For decades, the Ford F-150 has been America’s workhorse, and it’s never been in better shape. It’s more innovative, more appealing to drive and more versatile than ever before. Nobody understands the needs of the modern truck buyer better than Ford and nobody builds a better truck.”

Weaver said in addition to the feature advancements and true trucking abilities, Edmunds recognized the creation and early success of the electric F-150 Lightning truck and how important it is to the current EV revolution and the auto industry’s future.

“It’s hard to overestimate the importance of the Ford F-150 Lightning,” Weaver said. “Electrifying the most popular vehicle in the United States [F-Series] was a project fraught with risk, but Ford nailed the brief, brilliantly. The result is a better kind of truck and one that will stand at the vanguard of the electric revolution for years to come.”

Edmunds Top Rated Award winners are selected by the Edmunds editorial team based on informed opinions gathered during its vehicle testing and ranking process, including the Edmunds EV Range Test for electric vehicles. Edmunds’ editors selected the overall winners from a group of finalists that consisted of each of the highest-ranked eligible new vehicles as of November 1, 2022, in their vehicle classes assigned by Edmunds. Eligible vehicles must have undergone the full Edmunds testing process by November 1, 2022, and be available for sale as new on January 1, 2023.

SPEEDtubeTV has undergone considerable growth with a subscriber increase of 1,223% in the past 28 days and 1.7 million views. Moreover, viewing times have increased by 2,782% with more than 335,400 hours of programming watched in the same period.

SPEEDtubeTV also announced that as soon as it reaches the 100,000 subscriber mark, it will bring back an all-new version of a fan-favorite show that has yet to be announced. All programming on SPEEDtubeTV’s YouTube channel is free of charge. New episodes of its automotive programming are added every Tuesday and Thursday and new shows are added and updated on a consistent basis. For more information, visit www.SPEEDtubetv.com.

MidwayPlus has announced the launch of a new on-portal trade credit feature designed to benefit both resellers and manufacturers. According to the company, MidwayPlus manufacturing clients can now offer their business-to-business customers a more efficient and cheaper way to pay for all products purchased on the MidwayPlus platform. Manufacturers have the flexibility to assist their customers with more payment resources and promote customer loyalty with none of the concern of managing the loan or credit of the buyer. The Shop Lender program allows qualified resellers to apply for payment terms within minutes and make purchases with 30-day terms, with no interest, fees or charges.

“With our new Shop Lender acquisition, we’re able to provide shops with access to fast, flexible financing so they can manage cash flows and invest in growth. Manufacturers can use the program to extend a line of credit to qualified customers without any loan liability. It’s yet another resource we offer to all B2B aftermarket businesses on the MidwayPlus platform to modernize their sales channels,” said Brian Lounsberry CEO of MidwayPlus.

Kalitta Motorsports’ corporate communications and media relations will be managed by 3-G Sports and its founder Rob Goodman in 2023, the team announced today. The 2023 NHRA Camping World Drag Racing season begins March 10–12 in Gainesville, Florida. Goodman is a media-relations veteran with extensive NHRA experience. Most recently, he served as the media relations director for Alan Johnson Racing from ’09–’15. Prior to founding 3-G Sports in 2004, he worked in Sports Marketing at R.J. Reynolds (RJR) as the manager of media relations for what was then the NHRA Winston Drag Racing Series. Goodman was recently appointed to the National Sports Media Association board of directors.

While at RJR, Goodman represented the overall series giving him experience at both the sanctioning body and team levels. In addition, he worked with sponsorships in NASCAR, the PGA TOUR, AMA Motorcycles and Unlimited Hydroplane boats. Since founding 3-G Sports in 2004, his experience includes work with the PGA TOUR, college athletics, USA swimming and other United States olympic sports, youth sports, sports tourism and non-profit organizations.

As of the 2023 season, Hankook is now official technical partner and exclusive tire supplier of Lamborghini Super Trofeo. The renowned international one-make cup comprises three series, held on four continents. In order to master the different requirements, Hankook has developed a new, high-performance race tire. The Ventus Race is specifically tailored to the Lamborghini Huracán Super Trofeo Evo2 racing car and, with its medium compound, provides a high level of grip and maximum consistency in all conditions and at all racetracks. The brand-new tire will be used in Lamborghini Super Trofeo Europe, North America and Asia. Hankook will also provide technical support at the racetracks, while Hankook engineers and mechanics will be on site to assist the drivers and teams.

The Grand Final will take place in Vallelunga for the third time on November 18–19. All the Super Trofeo competitors will gather at this showdown, roughly 30 kilometers from Rome, where they will line up in two 50-minute sprints to determine the overall winner for 2023. The Lamborghini Grand Final is not only the sporting highlight of Super Trofeo, but also a festival that has attracted spectators and fans from all over the world in recent years. 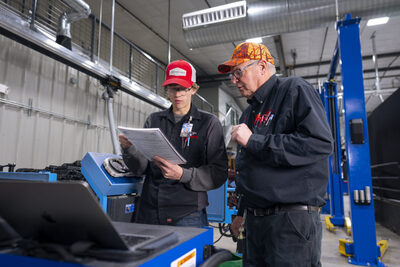 WyoTech seeks new instructors, following the construction of a new $16 million, 90,000-sq.-ft. expansion to its Laramie, Wyoming, campus. Completed in November of 2022, the expansion allows the school to increase its capacity to 1,200 students. Between 2018 and 2021, enrollment at WyoTech increased by 2,300%, prompting the need for additional space. The school’s current student enrollment is 850 students.

With this expansion, WyoTech is seeking new instructors to join its team and help provide the highest-quality education to its students. The school is looking for automotive, diesel and collision professionals passionate about teaching and mentoring the next generation of technicians. Instructors will not just be spending time lecturing, but will also get to spend time in the shop getting their hands dirty along with the students. They get the reward of seeing the students’ eyes light up when they finally understand their passion and have the satisfaction of helping the students’ dreams become a reality. All instructors will provide training at the Laramie, Wyoming, campus. No teaching experience is required to apply.

For more information on the school and to apply for instructor positions, visit WyoTech’s website or contact Shawn Nunley, vice president of training, at snunley@wyotech.edu.

Wilmar LLC and Rainier Partners have announced the appointment of Ken Hartman to CEO. With more than two decades of leadership experience in the tool and equipment industry, Hartman brings a track record of business expansion through the development and execution of innovative growth strategies. Prior to joining Wilmar, Hartman served as vice president and general manager of ESAB. Prior, Hartman held the title of president of Mac Tools at Stanley Black & Decker, vice president of aftermarket at Thermo King and key leadership positions at Chief Automotive Technologies and Snap-On Tools. 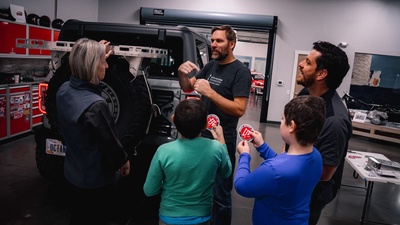 Kids from the Austin Hatcher Foundation helped Ian Lehn from BOOSTane put the finishing touches on a Bronco build that was displayed at the 2022 SEMA Show in Las Vegas.

At the end of 2022, BOOSTane Octane Engineering was driving its “Fandango” Ford Bronco through Chattanooga on the way to the 2022 SEMA Show in Las Vegas. The high-performance fuel company stopped by the Austin Hatcher Foundation (AHF) garage, where they met two young boys in the industrial arts therapy program who helped power up the Bronco with a few finishing touches. The boys, one in current treatment and the other a pediatric cancer survivor, built the Bronco’s spare-tire cargo rack and then attached it to the car.

”I was so excited to have the opportunity to work with the team over at AHF on our BOOSTane Bronco build,” said Ian Lehn, founder of BOOSTane. “Getting to not only work with the kids, but also learning how the intricate work that we we’re doing on the installation also doubled as cognitive therapy for them was incredible. Seeing the young boys excited to be building something was incredible in itself, but that it was also helping with their recovery was truly moving. The people at AHF have built something incredibly innovative and nurturing for those who need it most. The BOOSTane team was blessed to be able to be a part of it."

The now-finished Bronco was then on display at the SEMA Show in Las Vegas and continued its off-road adventure, which is shared on Instagram at @BOOSTaneWorld.

Not including the BOOSTane Bronco’s finishing touches, the Austin Hatcher Foundation has completed 16 full car builds since the nonprofit’s founding in 2006. The Foundation is constantly looking for new car build projects and partners to continue industrial arts therapy. Anyone interested in having the foundation customize their next SEMA Show build or personal vehicle, or anyone interested in donating parts, cars or financial assistance to the program can contact foundation Industrial Arts Manager Daniel Fosbinder at daniel@hatcherfoundation.org. 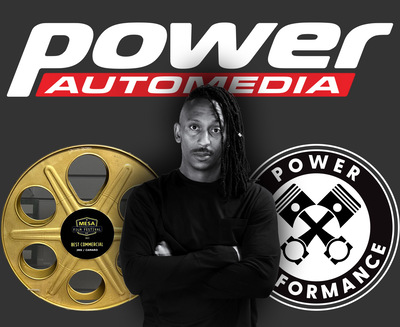 Power Automedia’s recently rebranded YouTube channel, Power + Performance (P+P), which has more than 105,000 subscribers, is spearheaded by newly appointed creative director Brandon McCray. P+P recently completed an advertisement video for JMS Chip and Performance, which launched in Q4 of 2022, and has seen success in the months following.

In October, the video received an award for “Best Commercial” at the 2022 Mesa International Film Festival. The video was also chosen as an “Official Selection.” The festival, created to highlight creativity from diverse voices, drew in more than 10,000 attendees and nearly 400 project submissions.

“The JMS Chip video brought in tons of attention and received international recognition at the Mesa International Film Festival,” explained McCray. “Seeing both the award and the video on display for attendees at the SEMA Show was the icing on the cake.”

The award, a repurposed vintage film reel, was displayed next to the client’s plug-and-play traction control device at the SEMA Show’s New Products Showcase in November. The JMS Chip TractionMAX was officially debuted at this industry-only trade show in Las Vegas, where it was the Performance-Street Product runner-up in the New Products Showcase.

In other news, Brian Wagner has been promoted from within the Power Automedia editorial team to take over the role of Street Muscle magazine editor. Boasting nine years of automotive journalism experience, with six of those as senior editor at Power Automedia’s Dragzine.com, Wagner brings a plethora of musclecar expertise to Street Muscle’s readers. Outside of Power Automedia, Wagner has worked as a crew member for a championship-winning X275 race car team. That experience has proven valuable in building a pair of high-powered Pontiac project cars for Dragzine that he races. 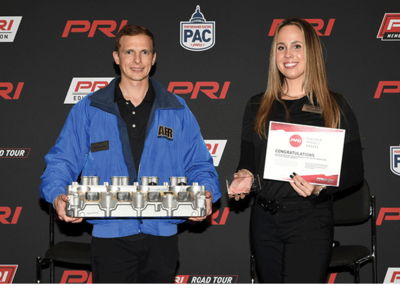