Luke McMillin and Rob MacCachren teamed to rise above the rest in a field of 276 starters to win the overall and SCORE Trophy Truck title in the season-ending BFGoodrich Tires 55th SCORE Baja 1000, presented by 4 Wheel Parts. The international event was the season-finale of the four-race 2022 SCORE World Desert Championship.

Starting second physically on the road in the elapsed time race and splitting the driving in McMillin’s Big Blue M racing machine all-wheel-drive 4 Wheel Parts/BFGoodrich Tires No. 83 Chevy 1500, the duo worked their way to the front of the pack and finished the 828.25-mile race around the Northern Part of Mexico’s Baja peninsula in a penalty-free time of 16:37:46 with an average speed of 49.81 mph. 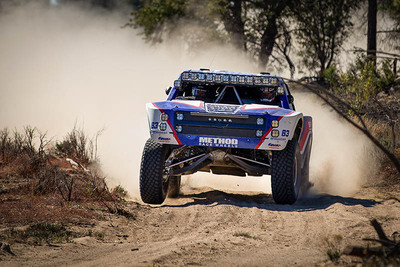 One of several ”super teams” competing in this race primarily because of the length of the course, Off-Road Motorsports Hall of Fame inductee MacCachren stabled his aging two-wheel-drive thoroughbred when invited to join the Big Blue M race team again for this historic race and be McMillin’s second driver in the McMillin’s No. 83 McMilling Racing AWD Chevy 1500 built by Mason Motorsports.

This year, MacCachren started and stayed the course, with Luke McMillin taking over the wheel at race mile 394, they then battled Luke’s older brother Dan McMillin and Josh Daniel, passing Josh when he had a flat tire, never looking back the rest of the way to the checkered flag. Dan McMillin and Daniel finished second to give the McMillin Racing family their first one-two overall finish in a SCORE race.

With his victory, Luke McMillin also earned a U.S. $25,000 contingency bonus from long-time SCORE sponsor and race title sponsor BFGoodrich Tires, offered to the winner of this year’s race. The victory also marked the 33rd overall victory in this race for vehicles equipped with BFGoodrich Tires.

Lucas Oil Pro Pulling League to Be Discontinued in 2023

Lucas Oil Products has decided to discontinue its ownership and operation of the Lucas Oil Pro Pulling League following the conclusion of the 2022 season. Established in 2006, the Lucas Oil Pro Pulling League has operated as one of the premier pulling organizations in the country, with 14 member state groups and 1,400 competitors across several different divisions. The Champions Tour and Silver Series comprised 13 classes of pulling action. The series officially wrapped at the 2022 Champions Tour Banquet held at the Hyatt Regency in Louisville, Kentucky, November 19. For more information, visit propulling.com or contact lucasoil@godriven360.com.

NASCAR has announced the creation of the NASCAR Brasil Sprint Race, the sanctioning body’s fourth international series and first in South America. The series, which will begin competition in 2023, is a partnership between NASCAR and the GT Sprint Race series in Brazil.

GT Sprint Race was founded in 2012 by Thiago Marques, a former standout stock car driver in Brazil, with the goal of balancing high levels of competition, performance and safety. The 2022 schedule included 18 sprint races over nine weekends at road courses across Brazil, including Autodromo Jose Carlos Pace (Interlagos) in São Paulo. The 2023 schedule will be released at a future date.