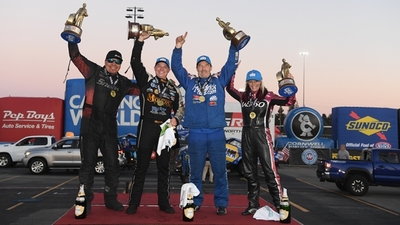 Force qualified No. 1 in her 11,000hp Monster Energy dragster and then earned the championship with her run of 3.701 seconds at 334.90 mph in the opening round of eliminations.

Capps earned his second straight world title by finishing as the runner-up on Sunday in his 11,000hp NAPA Auto Parts Toyota GR Supra. It is his third world championship, which was helped by a shocking second-round loss from Robert Hight on Sunday, who finished second overall on the strength of eight wins.

Matt Smith earned his third straight world title in Pro Stock Motorcycle and sixth overall with a victory in the first round on his Denso Auto Parts Buell.

In the Top Fuel final round, Prock finished off his impressive run in the Countdown to the Championship playoffs, winning for the second time in the postseason by going 3.641 seconds at 336.23 mph in the final round in his 11,000hp Montana Brand/Rocky Mountain Twist dragster. The career-best run sent him past Antron Brown and to his third career victory, also vaulting him to third in points to finish off the year.

Pedregon won his first race of the year and set a string of career-bests along the way. The topper was a 3.839 at 335.65 in his 11,000hp Snap-On Tools Dodge Charger SRT Hellcat in the final round against Capps.

Anderson didn’t grab a championship this year in Pro Stock, as Erica Enders rolled to her fifth title, but he did close out 2022 with a victory in Pomona, getting past Enders in the final round with a pass of 6.516 at 210.31 in his HendrickCars.com Chevrolet Camaro.

In Pro Stock Motorcycle, Angie Smith helped the team finish the season with a victory for the third straight year, knocking off Joey Gladstone with a 6.749 at 199.55 on her Denso Auto Parts Buell. 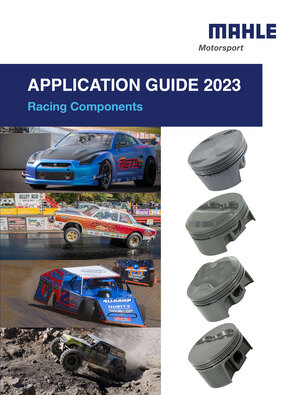 The new application guide is available to download now, or can be picked up at the 2022 PRI Trade Show at booth #1601.