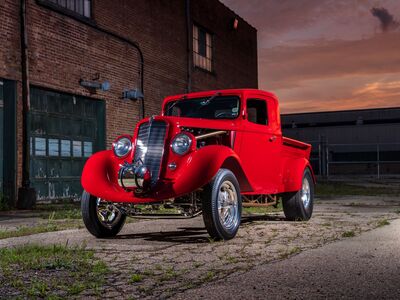 Visitors to West Hall booth #54149 will have the opportunity to see the 2020 Al Slonaker Memorial Award-winning ’36 Willys Pickup and speak to builder Brian Limburg of The Tin Man’s Garage.

Malco Products Inc. has announced it will sponsor three SEMA Battle of the Builders entries as part of the 2022 SEMA Show at the Las Vegas Convention Center, November 1–4. Visitors to West Hall booth #54149 will have the opportunity to see the 2020 Al Slonaker Memorial Award-winning ’36 Willys Pickup and speak to builder Brian Limburg of The Tin Man’s Garage. As the centerpiece for the Malco booth, the ’36 Willys features a PPG Ferrari Red paint job, custom Chromoly tube chassis, and 498-cid Arias V6 800hp Hemi engine. The truck is finished with Malco Automotive’s EPIC line of compounds and polishes.

In addition, Malco is sponsoring John Wargo and The Custom Shop Crew’s Battle of the Builders entries. A ’66 Mustang named “Double Down” is a convertible with a motorized removable hardtop riding on a Roadster Shop chassis with a Coyote swap running through Ultimate Headers & Pypes exhaust. It is finished with ProSpray paint with graphics and buffed out with Presta Automotive compounds and polishes. Malco is also sponsoring a ’53 Chevy truck named “GrandPa Dave” that is the owner’s grandfather’s original truck and rebuilt to a killer street custom. “GrandPa Dave” features a Roadster Shop chassis, LS3 with COMP Cams and Holley EFI running out of a Pypes exhaust, and is finished with ProSpray Paint buffed out with Presta Automotive compounds and polishes. Visit “Double Down” and “Grandpa Dave” in SONY booth #11123 in the North Hall. 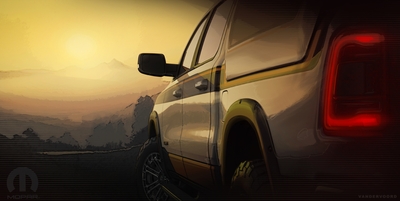 MOPAR Charged Up for 2022 SEMA Show

MOPAR has released concept sketches in advance of the upcoming 2022 SEMA Show in Las Vegas, November 1–4. Mopar will showcase customized vehicles and hundreds of quality-tested, factory-backed performance parts and accessories in its 15,345-sq.-ft. exhibit in the South Hall of the Las Vegas Convention Center. For more information, visit www.mopar.com.

Competitive Suspension will continue to sell and service suspension components by AFCO, Penske and JRi Shocks, and is also equipped to handle in-house dyno services. Additionally, the pair plan to offer on-track consultation services at Bradenton Motorsports Park in Bradenton.

Race Winning Brands (RWB) has announced the addition of Scott Neely as the director of powersports sales and the transition of existing RWB veteran Scott Highland to the director of marketing. Neely brings more than 20 years of experience in both the powersports and automotive sectors. Previously, he held multiple roles at Cometic Gasket, most recently handling responsibilities with powersports and automotive OEM and retail accounts.

Highland, meanwhile, joined RWB in 2018 as the director of Powersports with more than 30 years of experience. In his new position, Highland will reinforce RWB’s “commitment to actively sharing its passion for performance with the automotive and powersports communities,” as well as support RWB’s efforts in product support and education for partners and end users. Neely and Highland will both report directly to RWB Vice President of Sales and Category Management Cary Redman.

The Auto Care Association has appointed Ted Hughes as its new senior director of community engagement and executive director of the Aftermarket Warehouse Distributors Association (AWDA)—an organized group of warehouse distributors for the motor-vehicle aftermarket with more than 600 members.

Hughes brings more than 20 years of aftermarket experience to the association, with his most recent role being the head of marketing for MAHLE Aftermarket. In his role as head of marketing, Hughes was responsible for promotions, public relations, advertising, motorsports programs and the advancement of all electronic and web-based activities.

In his role as senior director of community engagement, Hughes will help to establish engagement strategies, communicate membership benefits and implement community practices and policies. As executive director of AWDA, he will provide guidance and support for all organizational activities, including assistance in engagement, growth and retention. Since 2020, Hughes has served as the vice chair of the Auto Care Association’s Marketing Communications Committee.

Total Seal Piston Rings—the manufacturer and provider of high-performance and racing piston rings based in Phoenix—has announced two new hires. Kent Croutcher has been named the vice president of finance. As a senior accounting and operations professional, Croutcher has extensive experience creating and executing financial strategies to allow companies to expand and manage their growth.