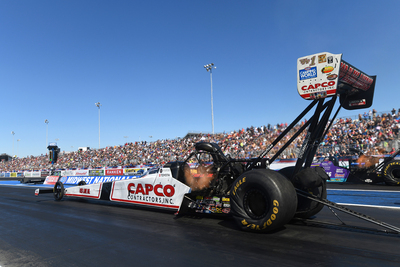 Torrence put together a run of 3.741 seconds at 328.70 mph in the final round in his 11,000hp Capco Contractors dragster, slipping past Josh Hart, who went 3.749 at 329.67. Torrence jumped three spots in the standings to move into second in the title chase. He trails Justin Ashley by just 14 points with three races remaining.

Enders now has the most wins at World Wide Technology Raceway of any driver in NHRA history, claiming her sixth St. Louis win by knocking off Dallas Glenn in the finals in her Melling Performance/Elite Motorsports Camaro. Glenn went red, while Enders put together a pass of 6.535 at 210.28, extending her points lead.

Smith finished off a nearly-perfect weekend in Pro Stock Motorcycle, rolling to the win—and moving back into the points lead—on his Denso Auto Parts Buell with a run of 6.756 at 202.00 against Jerry Savoie in the championship round.

The NHRA Camping World Drag Racing Series returns to action October 13–16, with the Texas NHRA FallNationals at the Texas Motorplex in Dallas.

IndyCar has announced a 17-race schedule for the 2023 NTT IndyCar Series as the sport’s athletes will be showcased with traditional weekend dates, 13 races on NBC and a late-summer swing leading to another climactic ending to the 2023 championship. The 2023 season opens Sunday, March 5, on the streets of St. Petersburg, Florida. Racing then will take place all spring and summer, including the 107th Indianapolis 500 presented by Gainbridge on Sunday, May 28, before the season ends on Sunday, September 10, at WeatherTech Raceway Laguna Seca in Monterey, California.

The International Hot Rod Association (IHRA) announced recently that Paige Hamlin has been named the IHRA director of track and racer relations. Hamlin has worked with promoters, including Tommy Phillips, Luke Bogacki, Coalburg Promotions, Great American Bracket Races, and Final Call Promotions, and on major events, such as the Great American Guaranteed Million, the World Footbrake Challenge and the Million Dollar Race. In addition, she promoted her own major event, the Rudd Racing Engines Six Shooter Showdown at Xtreme Raceway Park in April. Hamlin also serves as social-media manager for Xtreme Raceway Park. She previously held a similar role with Drag Champ to help spotlight the Sportsman racer.