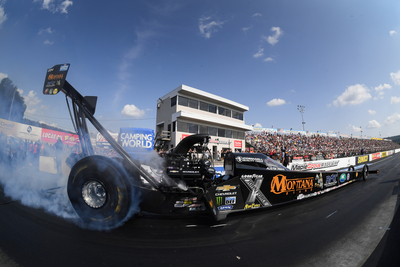 Austin Prock drove to his second career win and first of the season with his run of 3.755 seconds at 329.67 mph in his 11,000hp Montana Brands/Rocky Mountain Twist dragster in the final round against points leader Justin Ashley.

It was a dominant start for John Force Racing to open the Countdown to the Championship playoffs, as Top Fuel’s Austin Prock and Funny Car points leader Robert Hight powered to wins on Sunday in front of a capacity crowd at Maple Grove Raceway at the 37th annual Pep Boys NHRA Nationals. Erica Enders (Pro Stock) and Joey Gladstone (Pro Stock Motorcycle) also picked up wins at the first of six races in the Countdown to the Championship during the 2022 NHRA Camping World Drag Racing Series season.

Opening the postseason from the 12th position, Prock drove to his second career win and first of the season with his run of 3.755 seconds at 329.67 mph in his 11,000 hp Montana Brands/Rocky Mountain Twist dragster in the final round against points leader Justin Ashley. Prock also jumped six spots in the standings with five races remaining in 2022. Ashley jumped past Brittany Force in the points standings on Sunday and will take a nine-point lead to Charlotte.

Hight made a pass of 3.937 at 328.38 in his 11,000hp Auto Club Chevrolet Camaro SS against Tim Wilkerson in the championship round as his points lead stretched to 81 points over Hagan.

Enders avenged a loss to Troy Coughlin in the final round at Seattle with a stellar run of 6.582 at 209.72 in her Melling Performance/Elite Motorsports Chevrolet Camaro on Sunday at Maple Grove Raceway. Her lead also stands at 81 points over defending world champ Greg Anderson after the first playoff race.

Joey Gladstone jumped back into the points lead in Pro Stock Motorcycle with a win in the final round against Angie Smith, who went red. Gladstone put together a strong run of 6.835 at 196.93 to cap off his day and pick up his third win this season. His points lead now stands at 29 over M. Smith and Gladstone was sure to soak in the victory in what’s been a breakout season.

NASCAR has announced the 2023 schedules for the NASCAR Cup Series, NASCAR Xfinity Series, and NASCAR CRAFTSMAN Truck Series. During the organization’s 75th anniversary season, NASCAR’s national series will visit a mix of history-rich venues, short tracks and road courses, including the already announced Chicago Street Race. The 2023 Cup season will get underway with “round two” of the Busch Light Clash at the Coliseum, which will take place in East Coast primetime, Sunday, February 5. Two weeks later, on Sunday, February 19, will be the 65th annual DAYTONA 500 at Daytona International Speedway.

Additional highlights to the NASCAR Cup Series schedule include:

For the complete series schedules, visit the NASCAR announcement here.

Formula 1 has announced the calendar for the 2023 FIA Formula One World Championship, which the World Motor Sport Council has approved. Kicking off in Bahrain on March 5, and concluding in Abu Dhabi on November 26, the season will feature a record-breaking 24 races, with China and Qatar set to return, and Las Vegas arriving as the penultimate round for a Saturday night race. The traditional summer break will remain in August, though changes to race dates see Belgium move to the end of July as a back-to-back with Hungary, while the Netherlands is twinned with Italy after the restart. The full 2023 F1 calendar can be viewed here.