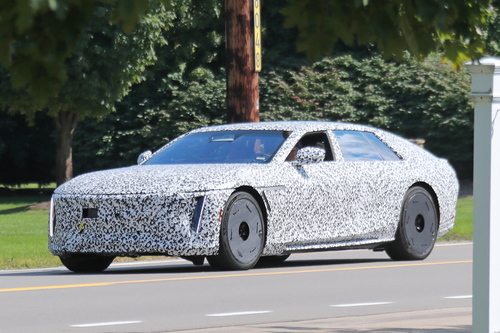 These are the first shots of the Cadillac Celestiq (actually) testing on public roads. While Cadillac released their own images of the Celestiq “on the road,” the shots were really taken inside of its Warren Technical Center.

The Celestiq will be Cadillac’s flagship sedan aimed at the ultra-luxury space going to battle with Tesla's Model S, the Lucid Air and Mercedes-Benz EQS in terms of performance but with a more premium cabin experience and a much higher price tag. Cadillac wants this car to be mentioned in the same breath as Aston Martin, Bentley and Rolls-Royce. GM President Mark Reuss said, “as Cadillac’s future flagship sedan, CELESTIQ signifies a new, resurgent era for the brand.”

Inside, behind a wide two-spoke steering wheel, expect a massive 55-in. LED screen that spans pillar to pillar across the dash, with additional screens for each rear passenger. Cadillac stated that of the five LED screens inside the Celestiq, the front passenger’s screen features a “digital blinds” innovation that prevents the driver from getting distracted and viewing what's seen (similar to Jeep’s approach with the Grand Wagoneer’s front passenger touchscreen).

Not much is known about the powertrain (we’re told 0–60 will clock in around 2.8), but the production Celestiq will sit atop GM’s corporate Ultium platform. The Celestiq included, will be derived from the Ultium vehicle platform toolkit and batteries that’ll be shared across numerous segments within the GM portfolio, from Chevrolet’s Blazer SS all the way north to the GMC Hummer EV duo.

Additionally, GM has plans to install up to 40,000 new Level 2 charging stations across the United States, specifically aimed at underserved, rural and urban areas. The goal, through what GM calls Ultium Charge 360, is to bring public charging to greater parts of the community with the help of its dealer network.

Expect the Celestiq to have an official debut in late-’23 as a ’25 MY. 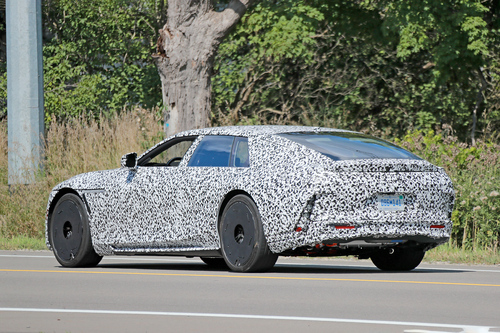